You are here: Home / Yachts / Motoryachts / Numarine 32XP Hull 3 Handed Over to Owner 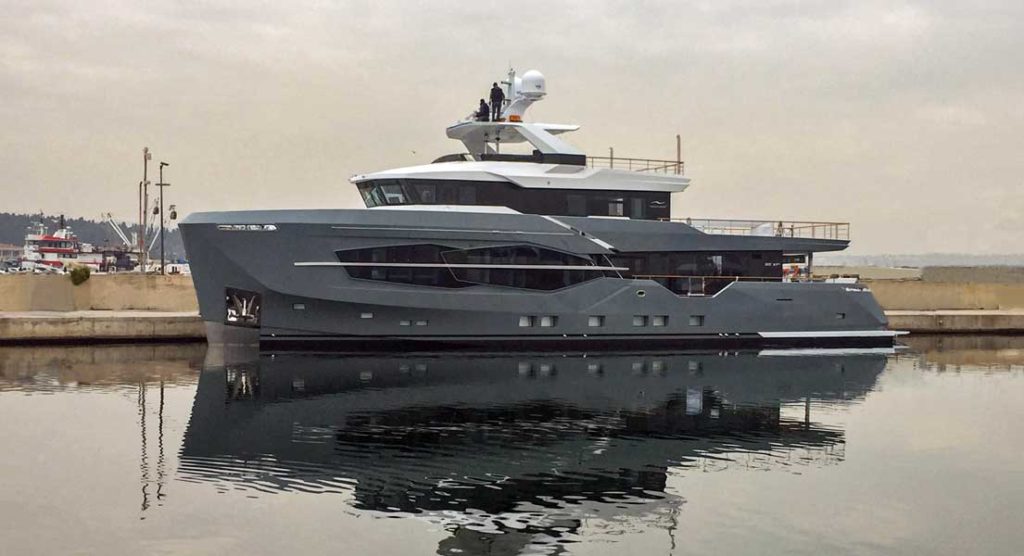 Hull number three in the Numarine 32XP series is cruising with her owner. While the shipyard is keeping the name confidential, sources say her name is Q.M. The shippy-looking, long-range megayacht emphasizes simplified operations, and therefore peace of mind for buyers.

The series, which includes the cool blue Calliope, belonging to an American, premiered in summer 2017. While Numarine already had a sleek, stylish, flying-bridge series, this was a dramatically different turn. The founder and chairman of the shipyard, Omer Malaz, says that he drew inspiration from the “smart” world in which we live. Just as high-tech companies and devices make our lives easier, so, too, he wanted to make cruising easier. That’s why the Numarine 32XP puts a user-friendly interface at the captain’s fingertips. He or she can monitor everything onboard, at all times. It’s unusual for a 106’6” (32.5 meters) megayacht.

Further unusual for her size, the Numarine 32XP has “floating” cabins. In other words, the four guest staterooms as well as the owner’s suite are isolated from the steel and fiberglass structure. Typically, larger megayachts in the 164-foot (50-meter) range take this approach. It reduces sound and vibration transfer. In fact, the Numarine 32XP has exceeded Det Norske Veritas’ Class 1 Comfort Class requirements. The shipyard says that decibel levels in the master, while underway, are less than 37 decibels, quieter than the average library. Numarine worked with Silent Line, a sound specialist, to attain this.

The owner of this third hull wanted a layout similar to number one in the series, Marla. Therefore, the megayacht has a gym on the main deck. She also has six staterooms, for 12 guests. Among them, a special VIP sits on the upper deck, aft. It has private access to the alfresco space, too. That space doubles as toy stowage, for two PWCs and a RIB, along with the crane to launch them. The master, meanwhile, is forward on the main deck. It spans the full 26’2” (8-meter) beam.

Expect this Numarine 32XP to enjoy a range of 4,000 nautical miles at 8 knots, with a five-person captain and crew.