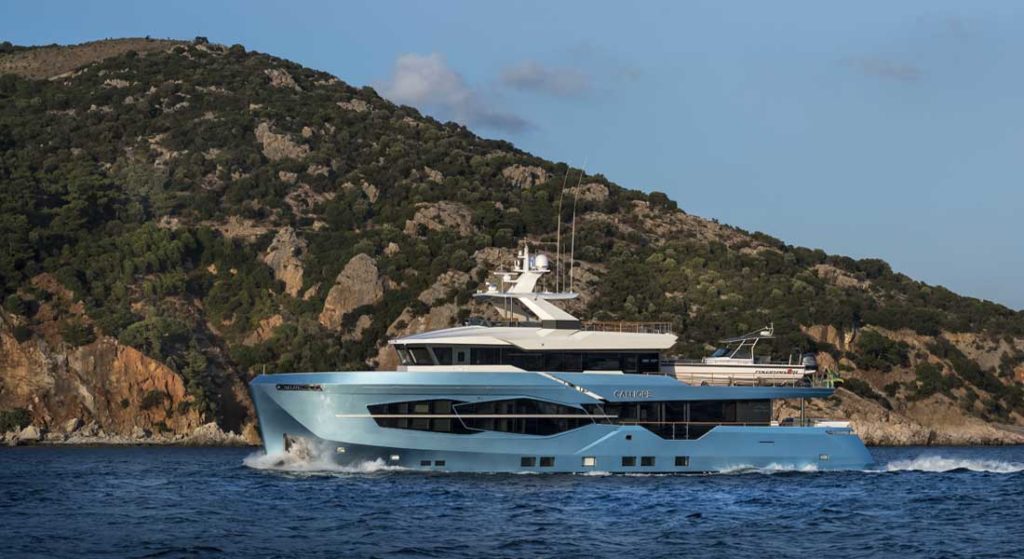 At the Fort Lauderdale International Boat Show, you’ll get a chance to see the newest pride and joy for an experienced American yacht owner. She’s Calliope, hull number two in the Numarine 32XP series.

Since the Numarine 32XP is a semi-custom series, this owner took full advantage. For instance, the megayacht has five staterooms, rather than six. In addition, Calliope has a gym on the main deck, just forward of the saloon. Furthermore, she has a skylounge. Hull number one in the series, delivered last year, placed the sixth stateroom up here. Complete with a bar, the skylounge can become an indoor-outdoor entertainment space due to sliding doors.

While we don’t yet have photos, Calliope additionally features a mix of marbles, woods, metals, and other materials throughout her interior. Whether guests are watching TV in the saloon, relaxing in their staterooms, or sneaking a snack from the galley, they should enjoy the ambiance. So, too, should the owner, who gets a 323-square-foot (30-square-meter) suite forward on the main deck.

For alfresco entertainment and relaxation, Calliope has a few enviable areas. The foredeck, for example, follows typical Numarine tradition. Two sunpads accompany a settee and cocktail table. Sundowners aren’t the only things to enjoy here, since the crew can set up a bimini for shade any time of day. At anchor, the tender you see aft on the upper deck (plus two PWCs, not visible) can go in the water. This frees up space for loose lounges, if the owner wishes. For the ultimate aerie, there’s the flying bridge, with a healthy 646 square feet (60 square meters) of lounging space.

Because the Numarine 32XP was conceived for long-range cruisers, she has equally healthy performance figures. The shipyard says she’s capable of 4,000 nautical miles at 9 knots. Top speed with her Caterpillar engines is 14 knots, while cruising speed is 12 knots. Further noteworthy, she’s quiet while running. Numarine collaborates with the company Silent Line to keep sound and vibration lower than is commonly expected. All staterooms “float,” meaning they’re isolated from much of the disturbing sensations. Numarine says it measured sound levels lower than 37 decibels in the master suite with the engines running. While it doesn’t specify at what speed the yacht was, that decibel level is quieter than your average library. It does say, though, that when the yacht is at anchor—without the engines running—the master suite’s sound levels are a mere 30 decibels. That’s like being in a serene rural area.