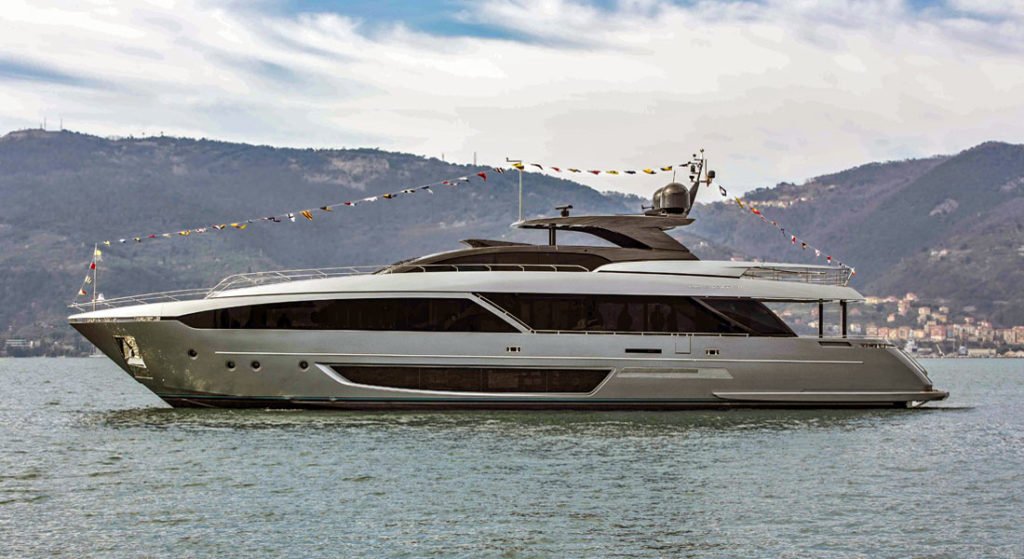 Leave it to Riva to make a dramatic entrance. The Italian yacht builder chose the recent Monaco Historique, the race for grand prix cars built from 1977 to 1980, for the premiere of its latest, and largest, megayacht, the Riva 110 Dolcevita.

It was an extra-suitable occasion, considering one party with a hand in her design comes from the automotive world. He’s Piero Ferrari, of the renowned Ferrari family and same-named sports cars. Piero Ferrari became an investor in Ferretti Group two years ago. He now heads the Ferretti Group’s Strategic Product Committee.

As with all Rivas, that in-house division worked alongside Officina Italiana Design for the Riva 110 Dolcevita. A flying-bridge megayacht, she bears strong shapes as well as sporty flair. Furthermore, to create a sensation of being what Riva calls a “crystal palace on the sea,” floor-to-ceiling glass spans the saloon. In fact, the glass to both sides is just one single pane.

Also in keeping with other Rivas, this new model offers buyers plenty of choices inside. For instance, while four guest staterooms sit below decks, you can add a Pullman berth to one of them. Farther aft, the tender garage can double as a beach club. It does so with the addition of lounge chairs when empty. In garage mode, the 110 Dolcevita totes either a Williams DieselJet 505 or 565 RIB. If you so wish, you can add a PWC to stow alongside it.

Of course, the standard features make the Riva 110 Dolcevita attractive, too. She includes a submersible hatch to make launching and retrieving the tender a simpler operation. She also puts your stateroom forward on the main deck. You therefore make the most of the 23’9” (7.27-meter) beam.

“We chose Monte Carlo for its debut because this is one of the most ‘Dolcevita’ locations in the world,” explains Alberto Galassi, CEO of the Ferretti Group. He adds, “It pays tribute to a wonderfully carefree period of history, brought back to life in a magnificent vessel that is the perfect synthesis of the traditional and the modern.”

The world premiered occurred nearly two months after the Riva 110 Dolcevita launched. Here’s what spectators and special Riva VIPs got to see, and experience, in Monaco.