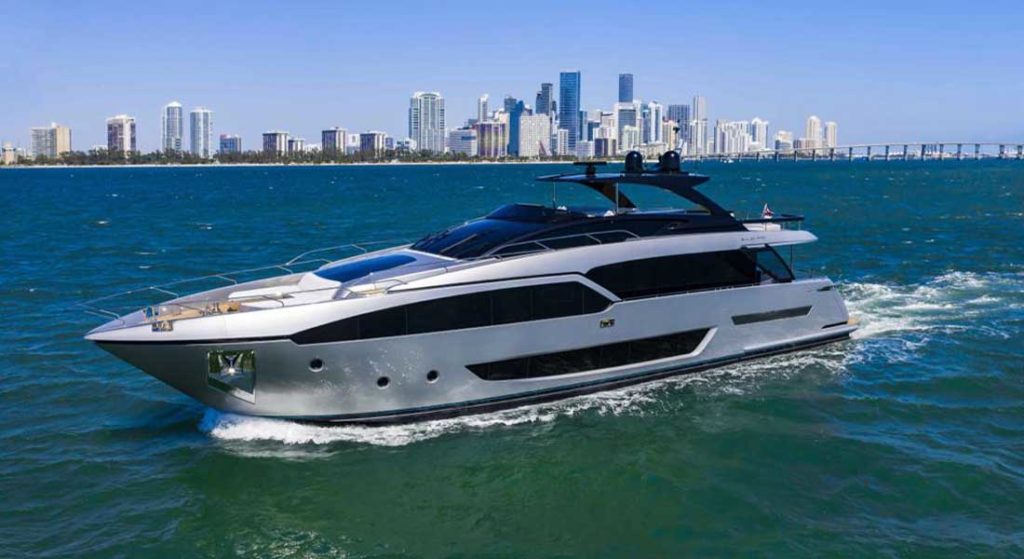 The Miami skyline was more than just the backdrop for the photo shoot for the Riva 90 Argo. The latest-generation flying-bridge motoryacht from the Italian builder premiered in the Magic City before select guests at a VIP event in February. With striking, sharp lines, the megayacht keeps a family feel initiated by her bigger sisters. Simultaneously, she suits cruisers who want a sense of volume without having to exceed the 100-foot size range.

With a length of 93’6” (28.49 meters), the Riva 90 Argo joins two other relatively new flying-bridge megayachts in the Riva fold. The first is the Riva 100 Corsaro, while the second is the Riva 110 Dolcevita. All three feature styling from the shipyard’s own design team as well as Officina Italiana Design. Notably, besides having strong shapes, the yachts have large, single panes of glass to port and starboard on the main deck. Aboard the Riva 90 Argo, this makes relaxing in the saloon all the more enjoyable.

You can relax here while out cruising with seven friends and family. The Riva 90 Argo has four staterooms, including a main-deck owner’s suite. Of course, the open flying bridge will prove to be a favorite for day trips, overnight cruising, as well as travels up and down the coast. The reported range of 320 nautical miles is also enough to handle any of these desired excursions.

In addition, in the usual approach for Riva, the yacht emphasizes sporty performance. Three different engine options each pledge speeds to please. The standard MTU package, for example, promises a top speed around 26 knots. If you thrill to faster speeds, there’s one that promises to push the Riva 90 Argo to 30 knots.

If you weren’t among the VIPs at the party, don’t fret. You will get a chance to see the Riva 90 Argo in less than two weeks. The megayacht will appear at the Palm Beach International Boat Show.

As to why the model bears the name Argo, the answer comes from Stefano de Vivo, the Ferretti Group’s chief commercial officer. “We started from the idea of our history and wanted to name this yacht after the oldest boat on the planet.”