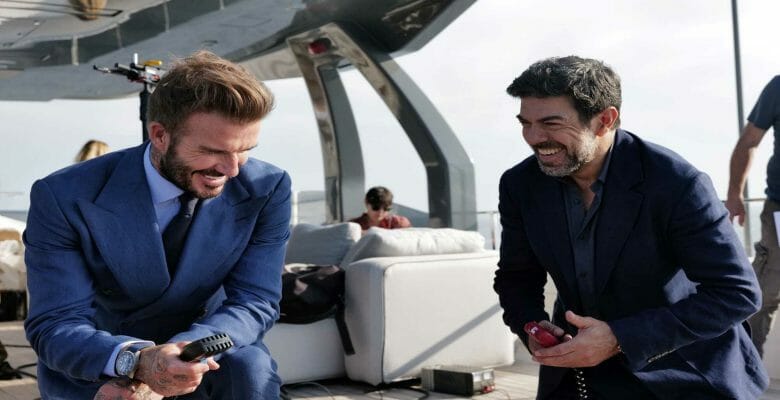 What do soccer star David Beckham and Scuderia Ferrari driver Charles Leclerc have in common? They star in the short film The Persuaders for Riva. More to the point, they star alongside a few Riva yachts.

If you’re familiar with Italian television, you may remember a well-known TV series by the same name. (In Italian, it’s Attenti a quei due.) It aired initially in England way back in 1971 and 1972, starring Roger Moore and Tony Curtis. It became a huge hit on Italian television starting in 1974, continuing into the 1980s. The two actors play friendly rivals who embark on numerous daring adventures, led by a third character. They travel throughout Europe, including the French Riviera. Their escapades further involve luxury cars and, of course, beautiful women.

The Persuaders for Riva, which celebrates the brand’s 180th anniversary, pays homage. Similarly to the original series, it takes place in Europe. In fact, scenes are along the coastline between Italy and the Côte d’Azur, plus in Monte Carlo. Amidst the hijinks, you’ll spy a Ferrari and a vintage Maserati. Filming took place just within the past several weeks, too.

One more notable person, actor Pierfrancesco Favino, joins the action. However, the yachts and a superyacht, all from Riva, are the stars. “Riva’s story reads like a movie, and this extraordinary short film, with its awesome trio of protagonists, is the perfect celebration of the brand’s 180th anniversary,” notes Alberto Galassi, Ferretti Group’s CEO.“I was a loyal viewer of the TV series The Persuaders! and I found the same ironic and elegant style in this little gem of a film. As always, Riva delivers big emotions.”