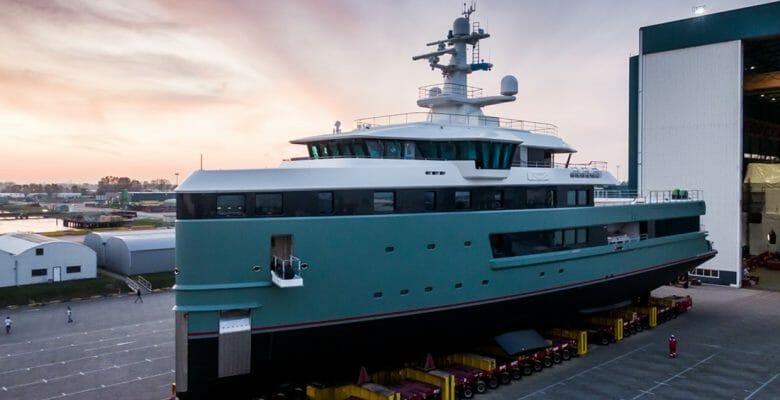 While children around the world were dressing up in costumes and collecting candy on October 31, the team at Damen and Amels were rolling out the first Damen SeaXplorer from her build shed. The 203-footer (62-meter) has plans for adventurous, arduous travel that match her stanch styling and naval architecture.

The megayacht is part of a range of true explorer yachts. In fact, this first Damen SeaXplorer launch comes a few months after the SeaXplorer 77 La Datcha arrived in The Netherlands for final outfitting, from Romania. Construction of the range starts at one of the global Damen facilities, with the finishing touches taking place in The Netherlands.

Even though she belongs to a multi-size range, this project is an entirely custom design. Damen’s own naval-architecture team collaborated with Azure Naval Architecture, for example. The latter handled styling. A good deal of technical input comes from EYOS Expeditions, too, the company specializing in arranging expeditions worldwide. Interior design, meanwhile, comes from Monaco Yacht Temptation. The company offers design in addition to brokerage and management services.

Due to the owner’s request for confidentiality, the construction team has not revealed information on the interior arrangement. Nor do we have details on all of the support craft and/or watertoys that may eventually stow aboard. Regardless, this first Damen SeaXplorer does have two large tender garages, along with a well-equipped dive center. Furthermore, she has a certified helipad.

Due to her upcoming travels, the megayacht meets Polar Class requirements, for operation in certain icy conditions. In addition, she can stay away from shore fully independent for a month. To ensure she leaves as little impact as possible on the areas she visits, she has a Siemens BlueDrive diesel-electric system. Components include electric motors and a battery bank, along with three variable-speed gensets and a D.C. bus. It’s worth noting that the Siemens BlueDrive family of “green” energy options inaugurated nearly a decade ago. In fact, the system is aboard a variety of offshore vessels worldwide.