You are here: Home / Yachts / Motoryachts / Madsummer, by Lürssen: Megayacht News Onboard 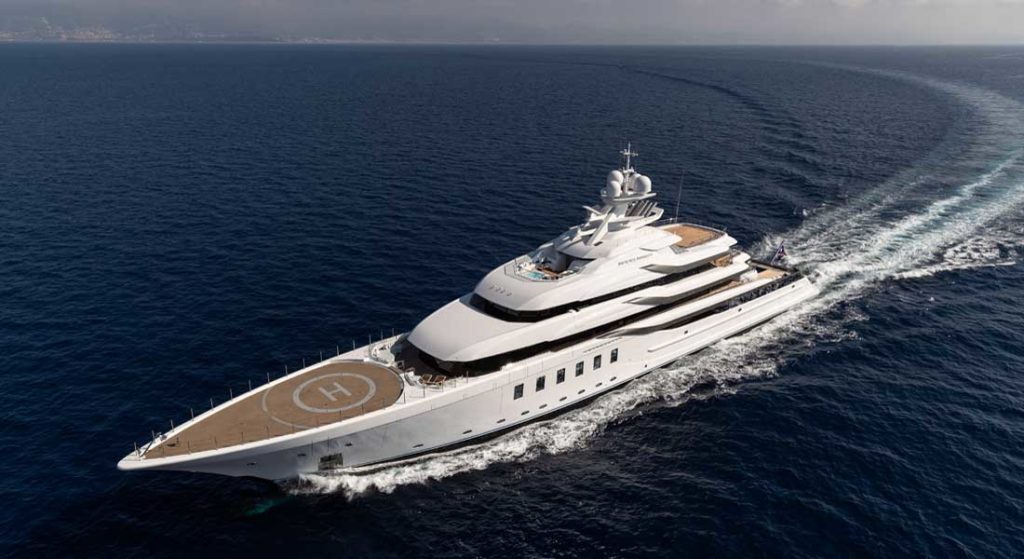 When a yacht owner asks for innovation as well as classic design elements, it may sound like an oxymoron. In the case of Madsummer, however, it is not. Demanding for sure, but a challenge to which the design and build teams rose. This nearly 312-footer (95-meter) from Harrison Eidsgaard, Laura Sessa, and Lürssen is a vibrant expression of how the owner likes to live, aboard what he considers a true second home. 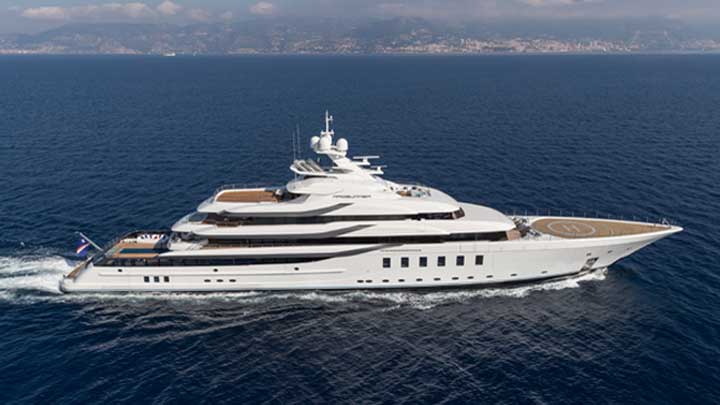 The owner had commissioned megayachts previously, including a 256-foot (78-meter) Lürssen. However, this was his first collaboration with Eidsgaard Design. Peder Eidsgaard, a studio partner, says the team fulfilled the desire for originality by ensuring not a single straight line graced her profile. Even the teak perimeter of the 29-foot-long (nine-meter-long) pool curves, mimicking the styling. Further novelty comes in how areas and features are of “human scale,” he adds. Given the LOA and 45’10” (14-meter) beam, Madsummer could have been overwhelming. She avoids it, for example, in the bulwarks framing the pool area. Note where the height changes, atop the glass insets. Eidsgaard demonstrates how it permits the owner and guests to stand here and gaze out at the horizon, acting like an armrest. In addition, the glass insets are sized and positioned to allow guests seated or in the pool to enjoy unobstructed views. 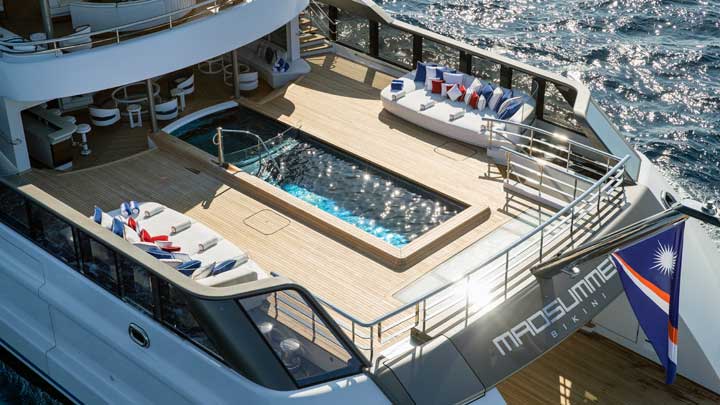 Even after a 15-year working relationship with the owner, interior designer Sessa had a challenge, too. Madsummer needed a depth of detail, balanced with a desire for a “put on some swim trunks and a T shirt” atmosphere, according to Peter Lürssen, the yard’s CEO. Sessa used the same materials from deck to deck for harmony, but changed the colors to create different moods. Specifically, woods like Oregon pine appear throughout, as do silks, all with different treatments. Furthermore, some areas that customarily are crew-only rooms have slightly heighted design details because the owner likes to use them, too. 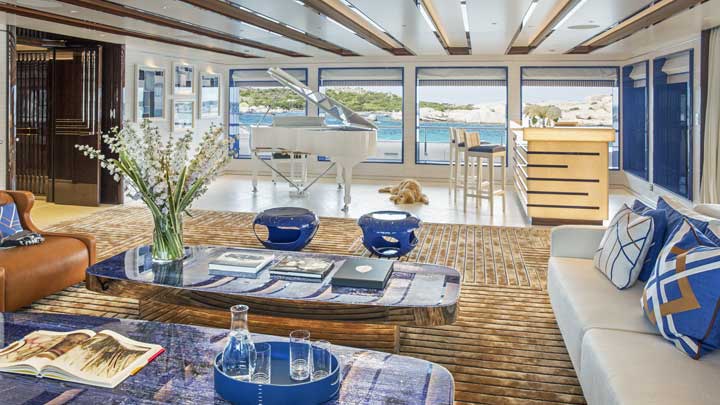 An example of the latter is the pantry—actually, three large pantries on three different decks, like the one off the sky lounge. This allows the owner to pour himself a cup of coffee from time to time, his preference. He also frequents the wheelhouse, being an avid offshore powerboat racer at one point in life and overall quite knowledgeable about yacht systems. The observation settee therefore has an Hermes-like look. Perhaps not coincidentally, the owner’s suite is on this same level, the bridge deck. 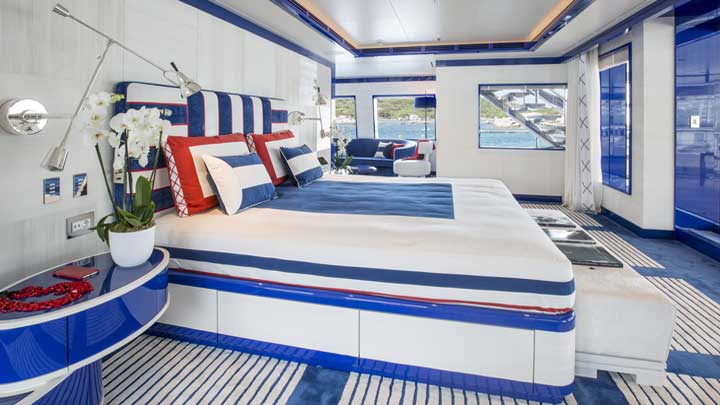 Speaking of the owner’s suite, the vibrant, patriotic American color scheme clues you in to the happy feeling he wanted Madsummer to reflect. White-tinted oak coated with a clear blue resin appears as paneling. This treatment repeats with different colors and woods in the nine guest staterooms, spread across the main and upper decks. Something singular to the master, however, is its location. It’s situated aft, a deliberate change from the suite on the previous Madsummer. The idea: maximize the views, and indulge in a private alfresco area. To that end, the deck here has a dining area, sunbeds, seating, and a hanging egg chair. For protection on windy days, glass panels slide out to each side, just as they do on the main deck. 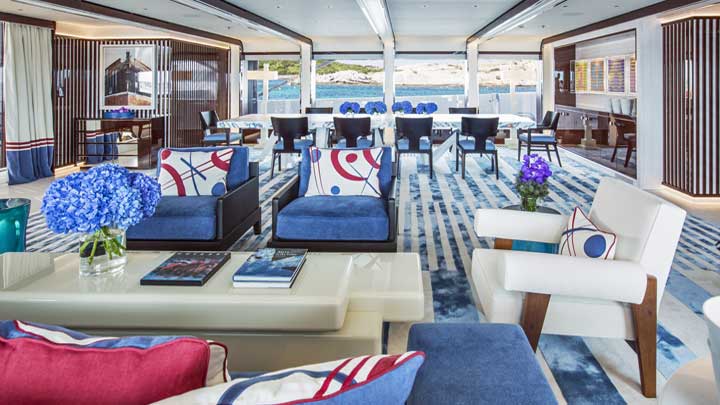 If you thought the master was awash with color, the saloon is even more so. Open to the dining area, it additionally incorporates another design theme found throughout. The walls have raised slats of rich-hued mutenye, an African wood characterized by dark browns and black veins. They form a striking geometric pattern in foyers, too, but best of all, they cleverly camouflage door handles, since pantries and the like sit behind them. 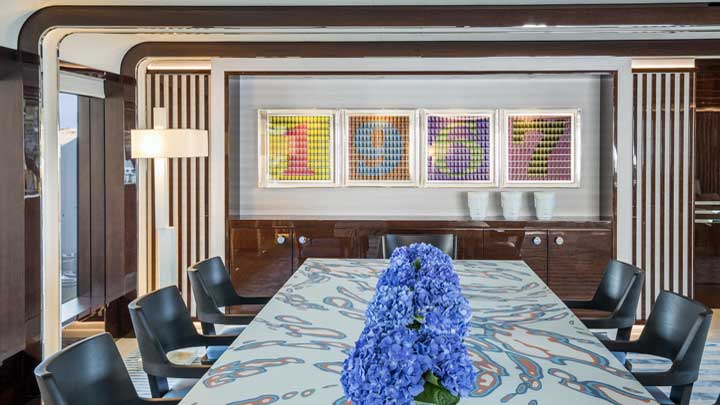 The geometric pattern extends into the formal dining area, to port of the saloon seating area. The 14-person dining table is the attention-getter, though. It’s custom created of layers of colorful lacquer by an artist, who then sanded areas to bring out colors and texture. Between this and the vibrant artwork (depicting a date of personal importance to the owner), there’s a true cheerfulness. 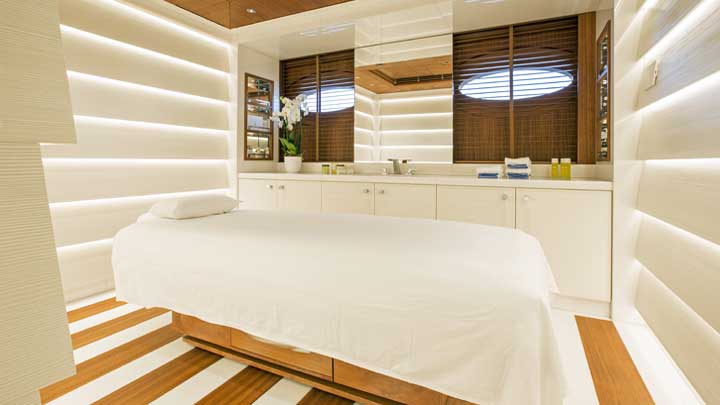 Further featuring a cinemaplus a spa, including a sauna, a hair salon, and an ice shower, Madsummer eschews affectation.  However, she doesn’t eschew sophistication, specifically in terms of technology. Lürssen created an energy peak leveling system, incorporating a battery bank with the electric gensets. If, for instance, Madsummer’s power-heavy systems aren’t taking a big draw, the battery bank stores the excess energy. The gensets also therefore burn less fuel and run less frequently. By the same token, if the chef or another member of the 29-person-strong crew needs to switch on energy-hungry equipment, the battery provides it, thereby preventing a genset from having to kick on.

Setting off soon for her first winter season, Madsummer has her sights set on Pacific cruising and a global voyage. Charter guests will occasionally be aboard in the coming months, too. In both situations, she’ll provide one of the more distinctive ways to experience this big blue marble upon which we live.