You are here: Home / Yachts / Motoryachts / Madsummer Maneuvers Out Into Open at Lürssen 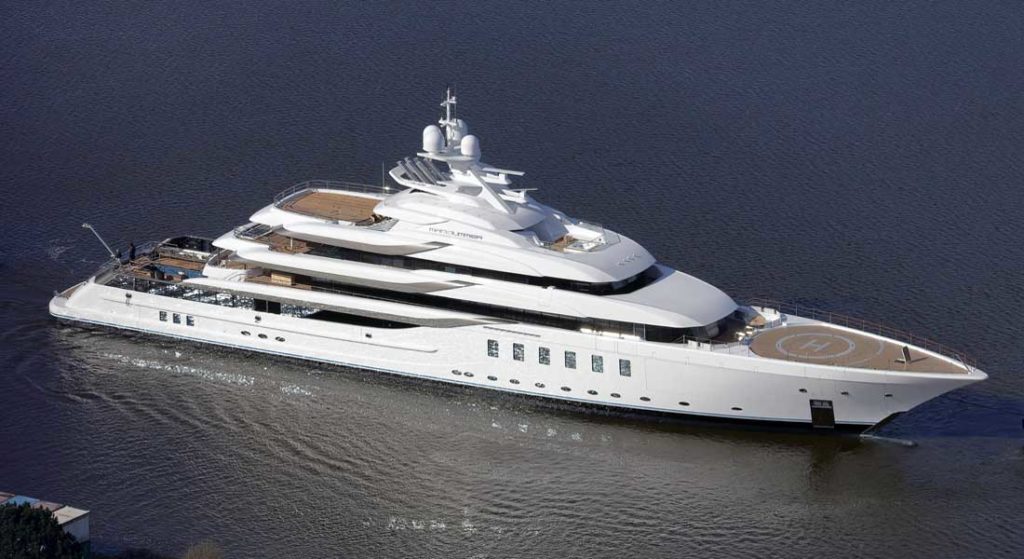 Sunny skies heralded the appearance of a superyacht whose name conjures images of spending warm days under bright-blue heavens. Madsummer slowly slipped out of a floating dock, thanks to guidance from a tug, at one of the facilities at Lürssen earlier today.

Unlike most of the German shipyard’s projects, the 312-footer (95-meter) has not been under a full publicity embargo. Lürssen, for example, confirmed the code name Project Fiji at the yacht’s technical launch in late 2017. It also confirmed styling by Eidsgaard Design as well as interior design by Laura Sessa.

A bit earlier than that, though, the owner’s representatives at Moran Yacht & Ship revealed details, too. For instance, Robert Moran of the eponymous firm mentioned that the owner had been “a great client” for 15 years at that point. “We’ve built many boats for him before,” Moran added. If the yacht’s real name sounds familiar, you may recall a same-named Lürssen. That Madsummer splashed in 2008, coming in at 257 feet (78.4 meters). Interestingly, she, too, bore an island-themed code name: Project Bermuda.

As for the new Madsummer, Moran says the owner and guests intend to pursue diving trips. Of course, they’ll have plenty onboard the megayacht to indulge them, too. Look closely at the main aft deck, and you’ll see a swimming pool. Specifically, it measures 39 feet (12 meters) long. Tucked below, a beach club as well as a spa further including a fold-down balcony await. Cool, crisp nights out on deck won’t be a problem, thanks to a fireplace out on the upper deck. That same deck has a skylight strong enough to allow guests to walk across it as they move about the deck. Inside, Sessa says, “I playfully created spaces full of customized details and colors from the sea, emanating harmony and elegance. All decks were designed with a specific focus on comfort but also practicality. The result will be absolutely stunning.”

Madsummer will begin cruising with parties of 20 in several weeks’ time.