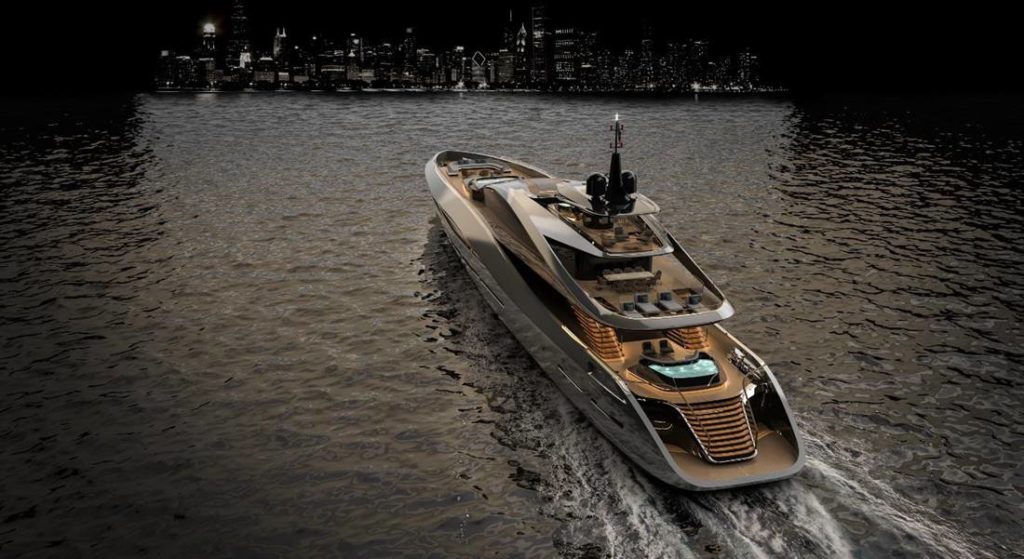 An all-aluminum megayacht bearing sinuous curves like a sports car, the Rossinavi Super Sport 65 promises speed to match. Anticipated to exceed 30 knots, and with a volume close to 1,000 gross tons, the 215-foot (65.5-meter) project is the second collaboration between the Italian shipyard and the Pininfarina design studio.

Specifically, the duo previously paired for Aurea, a concept from 2017. It should come as no surprise, then, that the Super Sport 65 grew out of that concept. Like her predecessor, the new design shows off strikingly curved aft decks. She takes the shapes a bit further, though. The stairways, for example, mimic the air intakes of high-performance cars, something Pininfarina knows plenty about. It’s collaborated with Ferrari, among other European carmakers. The staircases frame the floor-to-ceiling ports, too, if you look closely at the image below. 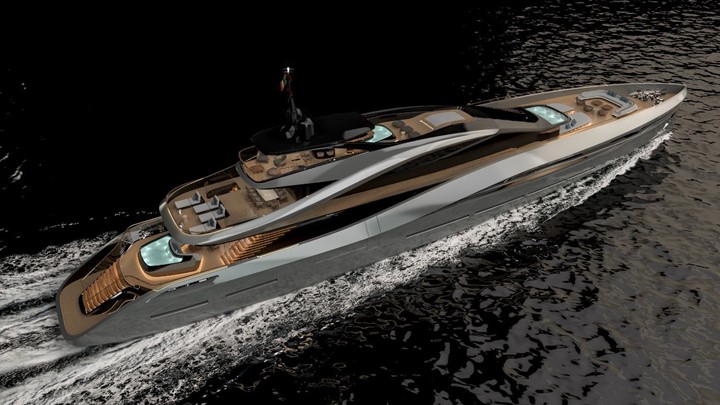 Sleek, sportscar-inspired superyacht designs sometimes limit layout comfort. Federico Rossi, COO of Rossinavi, proudly declares quite the opposite occurs with the Super Sport 65. While the 36-foot (11-meter) beam makes the saloon and main-deck owners’ suite capacious, the lower deck reveals the “new design dimension,” he says. Larger areas than typically seen are reserved for the crew’s quarters and engine room, he explains. A total of seven staterooms accommodate the captain and crew, while five take care of guests down here.

The Pininfarina influence stands out on the upper decks, too. The Rossinavi Super Sport 65 has a long, lovely curve connecting the upper deck with the sundeck. Overall, plenty of space is available for seating, whether via loose lounges or fixed settees, across each deck. The design and build team suggests putting a hot tub fully forward on the sundeck, to take advantage of the views (and, certainly, privacy). Similarly, pools and seating/sunning arrangements grace both the main aft deck and foredeck.

Befitting her name, the Rossinavi Super Sport 65 should see superb speeds. With four MTU 16V 2000 diesel engines, the megayacht should cruise at 28 knots at half load. Range is excellent, too, 4,000 nautical miles at 12 knots. Acknowledging customers who enjoy Bahamian or similarly shallow-water cruising, the Rossinavi Super Sport 65 boasts a draft of just 7’2” (2.2 meters).