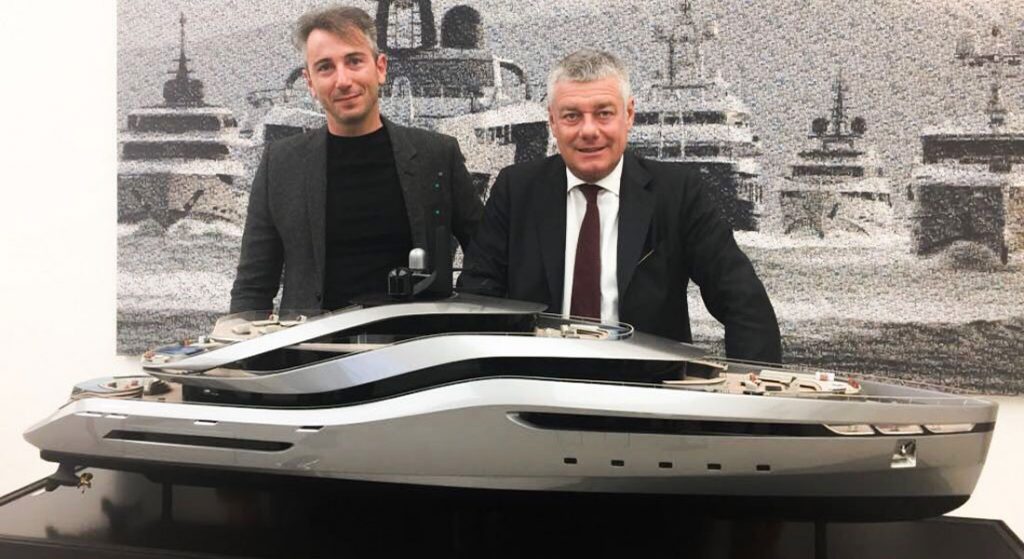 Two-hundred thirty feet (70 meters) of sinuous curves, and liberal relaxation. Those are the primary focuses of Aurea, a concept created by Rossinavi and Pininfarina. They mix automotive influences with extra-indulgent superyachting ones, but in ways you probably have not seen. Most important, Aurea is based on a proven technical platform, ready to be built.

Pininfarina is best known for its collaborations with Ferrari, as well as other European automakers. However, the studio also has an industrial-design background  and has penned several yachts. Aurea (“Aura” in English) is its first superyacht with Rossinavi.

The two companies came together via happenstance. According to Filippo Ceragioli, head of marketing and communications, a person familiar with each of them made an introduction at an informal event in Miami. “The base of our initial talks was our attention to car design, always a font of inspiration for the design of yachts,” Ceragioli explains. Of course, they also discussed Rossinavi’s approach to yacht building. This led to planning further discussions back in Italy, at Pininfarina’s headquarters.

If you’re a Pininfarina fan, you may see some of its signature elements. Paolo Pininfarina (pictured at right at top, with Rossinavi COO Federico Rossi) incorporates beveled edges. They flow fore to aft, wrapping around each deck edge, too. Fully aft, Aurea has striking staircases (below), fashioned to cascade much like small plates of lamellar armor. Simultaneously, the staircases incorporate some of the very shapes that made Pininfarina’s car designs so readily recognizable. Overall, Aurea looks nothing like any classic or modern megayachts. On purpose. 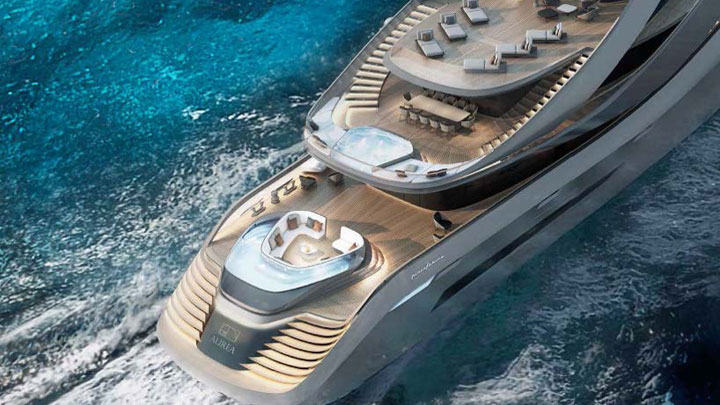 Furthermore, Aurea incorporates some yacht-specific features unlike any other. You can, of course, find multiple hot tubs and combination hot tubs and pools aboard some superyachts. But, you likely won’t find two full-size pools, as Aurea has. (You can see both of them in the aft view above. Note how the lower pool also wraps around a cockpit-like seating area on the aft deck.) In addition, Aurea allows guests to access watertoys and enjoy waterline views from each side of the hull. Speaking of waterline views, Aurea reportedly has a “record-size” beach club for a yacht of her LOA.

Part of that is due to Rossinavi situating the engine room amidships, rather than aft. Further, the engine room contains diesel-electric propulsion. Making the most of the 46-foot (14.1-meter) beam, the guest staterooms have moved up the main deck. They additionally take advantage of a common fold-down balcony. Due to the shape of Aurea’s hull, guests can see both to the side and forward from inside their staterooms.

As mentioned, Rossinavi views Aurea as more than a concept. She’s ready to sign. Her hull and propulsion stem from the proven platform of its King Shark megayacht, already in build. She’ll therefore have a steel hull, built to ice classification standards. Aurea should further see a range exceeding 6,000 nautical miles, and a 15-knot cruising speed.