You are here: Home / Yachts / Motoryachts / 10 Largest Megayacht Deliveries of the Decade Gone By 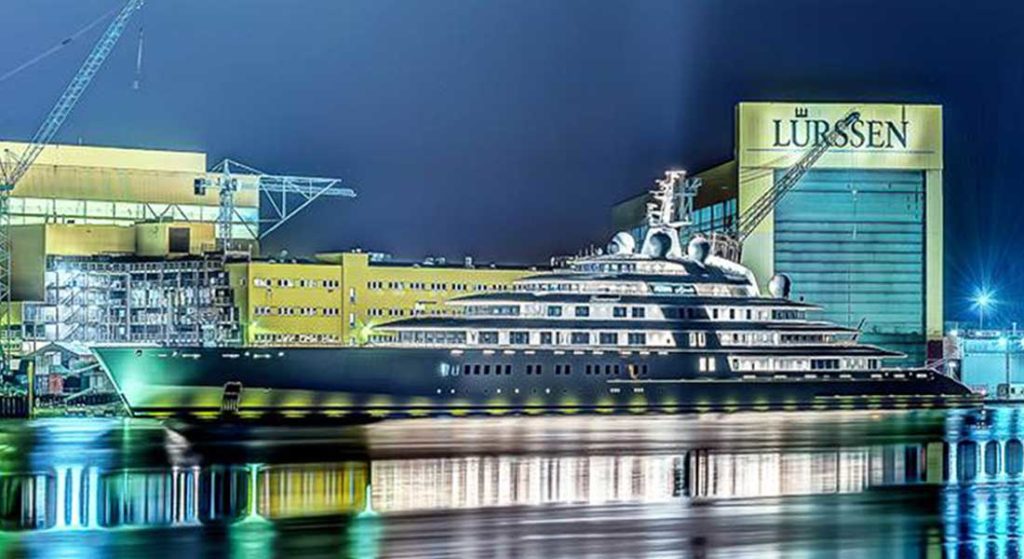 Welcome to the first days of 2020, and the first days of the new decade. It’s human nature to look ahead at times like this, especially at some of the biggest boats set for launch this year. However, for perspective, we thought it better first to acknowledge how much the superyacht sector has grown. In fact, the period from 2010 to 2019 will go down in yachting history as generating more megayachts exceeding 328 feet (100 meters) than any prior decade. In addition, the 10 largest megayacht deliveries of the decade handily exceed that size, and five of the 10 came from just one shipyard. Without further ado:

1. Azzam. Coming in at 592’6” (180.61 meters), Azzam (above) has been the world’s largest private yacht for the better part of the past 10 years. As if her length isn’t impressive enough, her volume exceeds 13,100 gross tons. Lürssen, her builder, revealed some other eye-popping statistics upon delivery in October 2013. For instance, she reportedly exceeds 30 knots of speed. She also has a beam exceeding 68 feet (20.8 meters).

2. Fulk Al Salamah. When Italy-based Mariotti Yachts handed over Fulk Al Salamah in 2016, yacht watchers immediately recognized the name. It was the same as a longtime support vessel accompanying the royal yacht of Oman. That one served from 1987 onward. This one, measuring 538 feet (164 meters), benefits from more modern technology, of course.

3. Eclipse. For three years prior to her delivery in 2010, Eclipse (above) was the subject of seemingly endless speculation. Her length, her name, her completion date; everything was debated. The now-defunct Blohm+Voss constructed her, measuring 533 feet (162.5 meters). Even years later, the megayacht continued to turn heads. When Eclipse arrived in New York City in 2013, jaded city dwellers couldn’t help but stop and stare.

4. Dilbar. The second of the five Lürssens on this list, Dilbar is 511’8” (156 meters) LOA. However, she is the largest private yacht in the world in terms of volume. Gross tonnage is 15,971. The revelation of several other facts shocked yacht watchers when Lürssen disclosed them in 2016. The yacht has an indoor pool with 6,357 cubic feet (180 cubic meters) of water, said to be the biggest of its kind. The shipyard also filmed her 52-month build, editing it down to a mere 40 seconds. 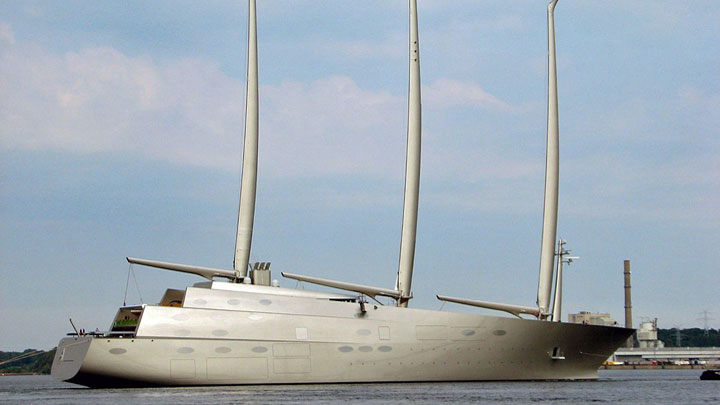 5. A+. This 483’10” (147.25-meter) megayacht launched in 2012 as Topaz, from (you guessed it) Lürssen. Interestingly, she changed names in early 2019, but it isn’t clear whether she changed hands. Sheik Mansour bin Zayed Al Nahyan, part of the royal family of Abu Dhabi, is the long-rumored original owner. Relatively little information is available on the yacht.

6. Sailing Yacht A. This is the first, and only, sailing superyacht among the 10 largest megayacht deliveries of the decade. Well, technically, Nobiskrug completed Sailing Yacht A (above) in 2017 as a sail-assisted vessel. This means the diesel-electric propulsion, not the sails aboard the 468’5” (142.81-meter) yacht, are her primary source of propulsion. Regardless, her three masts, which rotate, are the tallest freestanding structures made of carbon composite. Just the main mast is more than 328 feet (100 meters) high. Dykstra Naval Architects designed the three, weighing 50 tons each.

7. Yas. While Yas (below) launched in 2011, she is a conversion project. She started as a Royal Dutch Navy frigate, measuring 426 feet (130 meters), in the 1980s. In 1998, the United Arab Emirates Navy acquired her. But, it didn’t end up using the vessel. Nine years later, the government sold the ship to a private individual, who decided to convert her for pleasure use. She bore the code name Swift141, with “swift” referencing her anticipated 26-knot speed and “141” being her LOA in meters, or 463 feet. 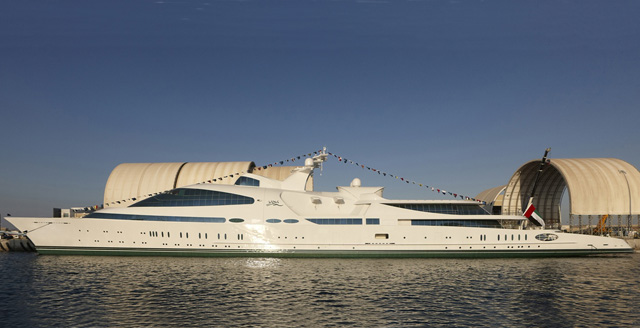 8. Ocean Victory. Italy-based Fincantieri has earned a reputation for constructing cruise ships and large commercial ships. It has tried its hand at a few major megayachts, too, such as this 459-footer (140-meter). Fincantieri delivered Ocean Victory in 2014, complete with six pools, an underwater observation area, and a floodable toy garage.

9. Flying Fox. Less than a year ago, Lürssen handed over this 446-foot (136-meter) megayacht, in time for the owners to head to Norway for the maiden voyage. While Flying Fox does charter, her owners haven’t put many photos of her interior features into the public eye. She has two helipads (one sitting on the highest deck), and a 39-foot-long (12-meter-long) pool on her main aft deck. She accommodates 36 guests, too.

10. Crescent. Last but not least among the 10 largest megayacht deliveries of the decade, Crescent is additionally the last of the five Lürssens referenced above. LOA: 442’9” (135 meters). She splashed in 2018, under the code name Project Thunder. “Thunder” signified Lei Gong, the god of thunder in Chinese mythology. The owner commissioned the yacht to cruise primarily in Asian waters.