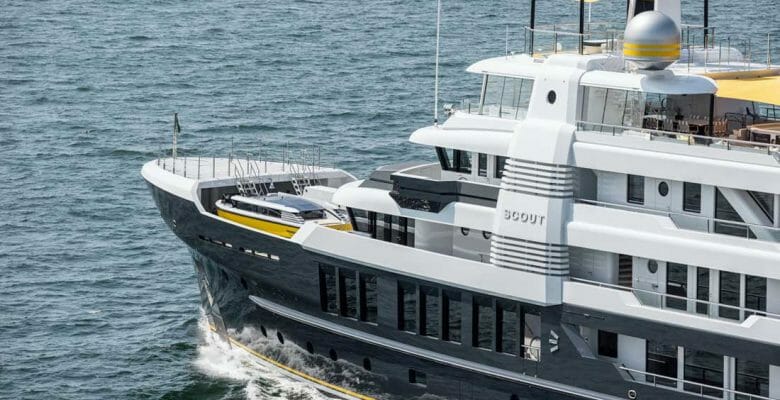 “We wanted it to look like a repurposed commercial vessel from the beginning,” say the owners of Scout. “We plan on doing world cruising anywhere and everywhere that’s safe for us, our crew, and our dogs, including far reaches and uncommon locales.” Equally important, “We wanted the overall appearance to look slightly sinister, betrayed by the bright, whimsical yellow accents.” These descriptions only begin to describe the 209-foot (63.72-meter), ice-classed megayacht that Hakvoort Shipyard built for these experienced cruisers.

Delivered last year, Scout is the pride of a couple who previously owned traditional yachts. Their prior yachts offered advantages, such as long range and a 12-person capacity. Their most recent yacht, a 148-footer (45-meter) from RMK Marine, also had a notable color scheme. Specifically, she had a Shark Gray and Sunshine Yellow combination. While the owners liked all of these, they wanted more: a true explorer. “We wanted something with greater range, stability, and capability,” the owners explain. 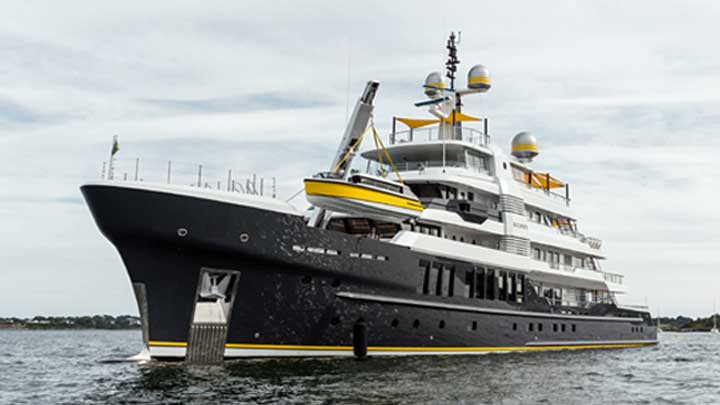 And, they were confident they would get exactly that from the design and build teams. They selected Hakvoort, Diana Yacht Design, and H2 Yacht Design for their respective reputations and skills. Scout’s scale, functionality, and looks—including tenders exposed forward on deck—resulted from close cooperation among the owners, the naval architects at Diana Yacht Design, and the owners’ build team from Fraser Yachts. Thanks to the design studio and Hakvoort, Scout has a reported 4,800-nautical-mile range at 12 knots, under Caterpillar power. Also, as noted above, her steel hull is ice-classed, for safer navigation in some icy conditions.

The owners had a strong vision for the interior of Scout, too. Particularly, the owners drew inspiration from Verne’s fictional submarine Nautilus, Lang’s movie Metropolis, Fleming’s various villains’ lairs. Oh, and don’t forget a healthy dose of Warner Brothers’ Looney Tunes, either. For most people, that would sound crazy, but “all of these ingredients have styles very appealing to us and play against each other in a way that is entertaining and unexpected,” the owners assert. 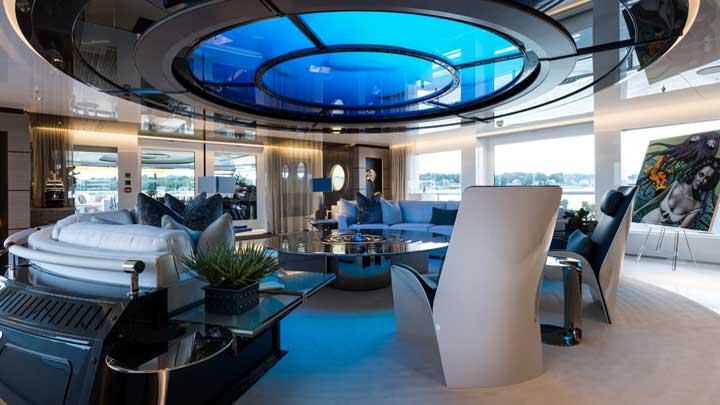 Jonny Horsfield of H2 Yacht Design was taken aback at first by the requests. “The design is a little off-the-wall—we’ve never done anything like this before,” he says. But, he considers the result “one of the most interesting projects of my career.” From stairways with a heavy-duty, industrial aesthetic to a main-deck alfresco bar with vent-like detailing, the decor is attention-grabbing. Even where artwork of sea creatures or Bond girls adorns walls, nothing looks kitschy. From the four guest staterooms on the main deck to the owners’ deck above, each area has its own personality, too.

While features like the interactive LCD ceiling in the saloon (above) are fascinating, the owners most adore the sundeck, observation lounge, and greenhouse. “The sundeck is where we spend the majority of our time onboard,” they say. “The observation lounge is a cozy and bright multi-functional area to retreat to when the weather keeps us indoors.” And the greenhouse? It’s their “man cave.” 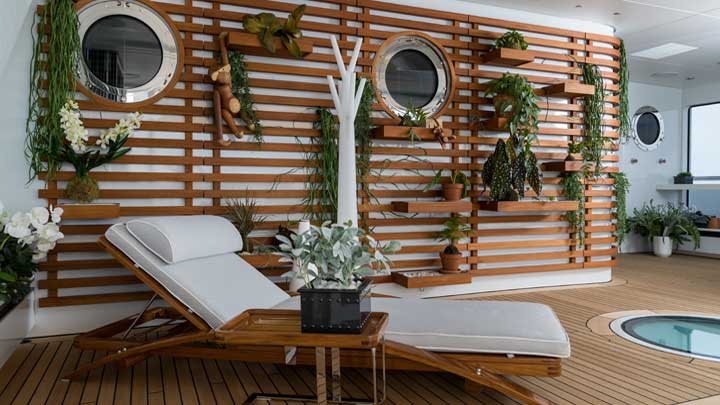 “Our best experiences have been people’s reactions to the overall design, ease of use, and sheer presence,” the owners say. Equally important, the “outstanding crew, most of whom have been with us for several years, if not from the beginning of our yachting life,” have acclimated well to Scout.

So, what’s next? The owners intend to spend another summer season in New England, and then Canada. Their long-planned global voyages kick off next spring, following a transatlantic crossing to the British Isles. Scout will then cruise through the Med, and beyond.

“Beyond” being the operative word, of course.