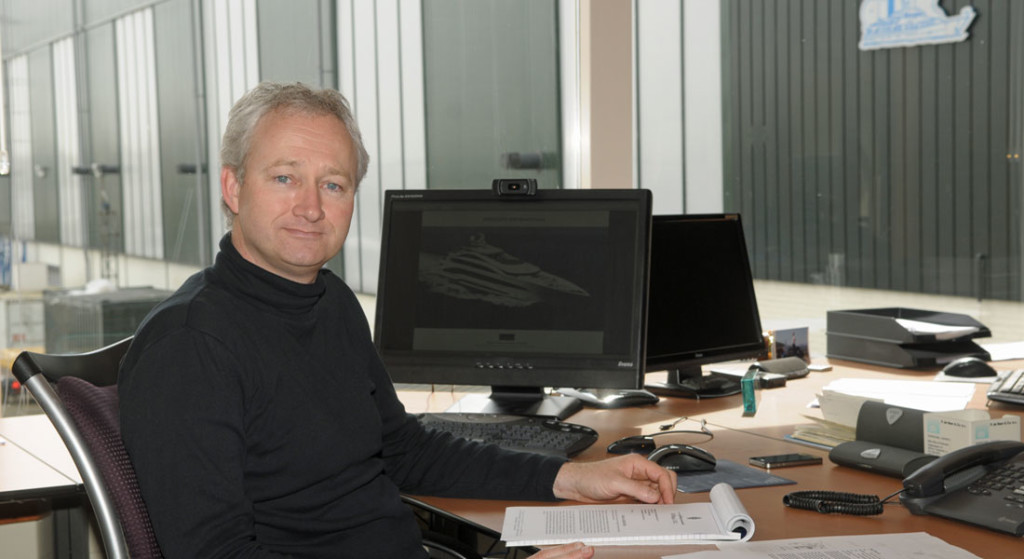 Closing in on its 100th anniversary, Hakvoort Shipyard remains a family affair. Based in Monnickendam, a traditional Dutch seafaring town, the yard is currently operated by the fourth generation of Hakvoorts. Hakvoort’s director, Klaas Hakvoort, carefully observed as his father, Albert, steered the company into bigger megayacht territory. Klaas himself has overseen a physical expansion of the yard to take on projects to 213 feet (65 meters). Being a small family business, Hakvoort Shipyard has what Klaas terms “a one-on-one contact with the client.” Klaas or his brother Albert Jr. meet and deal with customers personally whenever they visit the shipyard. In this Leadership Series, Klaas discusses the importance of a family-operated business, and whether Hakvoort will eventually build even larger megayachts.

MegayachtNews.com: The family history behind the shipyard resonates strongly with Americans. Is it of importance to all of your clients—is it something they remark upon?

Klaas Hakvoort: I think it appeals to virtually every client of ours. We deal with Americans. Americans often like tradition. The company has been in existence for almost 100 years, so that appeals to them, that there’s a long-lasting history of the shipyard, which also means that it’s very likely that the shipyard will still be there in 10, 20 years. We’ve dealt with several Arabs, and in the Arab world, family and its tradition are on a very high platform. The father of the family, especially in wealthy families, runs the family. It doesn’t matter whether they’re 70, 80, or 90 years old, if the father says no, it’s no. So when they come to our shipyard and see a similar operation, where you have the seniors and the juniors—my kids are now growing up—they see the same kind of relationships that they are accustomed to. That gives some trust. In the end, they’re spending an awful lot of private money on their yachts, and they want that money to be in good hands.

MegayachtNews.com: A lot of things have led to the megayacht industry expanding over the years. Is there anything that has most impressed you in terms of how this industry has grown?

Klaas Hakvoort: It somewhat has surprised me how big these boats are nowadays. Ten years ago, nobody would ever have thought that the market would move that way, and that it would be such a strong part of the market. Our shipyard has moved from smaller to larger vessels now up to 65 meters. We needed to adapt to the new industry, so to speak, and we’re dealing with different clientele. The 60-meter client is a different person than a 20- or 25-meter-boat client.

MegayachtNews.com: What do you see different today in how clients go about their research process and the meeting process with people like you?

Klaas Hakvoort: We’ve seen a process that simultaneously has happened with the shipyards as well as with the clients. The shipyards have become far more professional in the way they act toward the client and toward the building process than, say, 20 years ago. The clients have undergone a similar process. Twenty years ago, the client was a very enthusiastic entry boat owner, and he came to build his boat. Today, the client is an educated person who comes with their specialists, their accountants, their lawyers. They understand much more of the process than the amateur buyer did 20 years ago. And it needs to be this way, because at the same time, the industry standards have improved such that it requires a professional approach from both sides—from the shipyard and the owner’s side—to deal with each other. One thing that has impressed me in our industry is that in the past five or six years, we went through a serious crisis, and now we have this Russian crisis on top of it. At the same time, the industry standards have risen quite a bit, so we the shipyards have had to adapt to that. And at the same time, we had difficulty finding clients; we had to adapt to that. We also have experienced a large number of clients who were unable to finish their boats, so we had to adapt to getting either financing or other clients for these boats. So what has really impressed me is the flexibility of our industry. Most of the renowned shipyards have been able to adapt to all these requirements and still build great boats.

MegayachtNews.com: The maximum size you’re building to is 65 meters. Seeing as how there have been other shipyards that did similar expansions and are now looking to expand even more, is that something you’re also considering? Since you’re restricted in the space that you have in your location, have you thought about acquiring another facility?

Klaas Hakvoort: We have looked at that over the years, and a facility, a piece of land, became available just a few months ago. We found at the current time the financial risk is too high, so we’ve decided not to do it. But I can certainly see Hakvoort setting up a second shipyard in the distant future.

MegayachtNews.com: So you definitely would consider building yachts of, say, 70 to 75 meters or larger?

Klaas Hakvoort: Absolutely, but we grow at a slow pace. We want to understand what we’re doing.

MegayachtNews.com: There’s been a lot of talk in the industry on how we have to do a better job of promoting the fun aspect, the enjoying of yachting, and the lifestyle of yachting. For decades the industry has been very good at promoting a yacht as a product, but that doesn’t seem to be resonating with people these days. Do you have any ideas on how we as an industry can move in the right direction?

Klaas Hakvoort: That’s a difficult one, because obviously we are very much focused on the building part of it. Our shipyard is trying to make the build process a fun process for the client. Obviously, in order to sell the boat, we highlight aspects like new technologies and how the lifestyle suits you. But what is lifestyle? Lifestyle is nothing more than life at sea. And life at sea, we always say, is an adventure. Because you can spend time in a hotel, but you’re stuck in one location. So the thing with a boat is that you can go anywhere. Every time you enter a new bay, there’s a new adventure waiting for you. That’s basically what we see, and me personally on my own boat, as what’s fun. You never know where you’re going, and you never know what’s waiting for you. Going to Alaska on a big yacht, that’s an adventure. That’s what I think makes people build or buy boats. We’re now building an explorer vessel that’s ice classed and has all the gear possibly to go to the northern Russian route, Alaska, and all these remote areas that most yachts don’t dare to go to or want to go. To my opinion, that’s what drives people in buying or building a yacht. They want to seek an adventure, do something that you could normally not do on land.

MegayachtNews.com: What’s your opinion on the seeming rapid growth of yachts in the 90- and even 100-meter and up range? As you said, years ago no one could even imagine yachts in this range. Do you think it will continue?

Klaas Hakvoort: It’s difficult to predict, but if you look at the amount of billionaires increasing, there is quite a good chance that this will continue to happen for quite a while. One of the reasons for that is, with these bigger boats, there’s hardly any second-hand market. So anybody wanting to have, say, a 100-meter-plus boat has to build it. There’s only a few shipyards in the world that can build a quality 100-meter-plus boat. I think this is why this market is so strong right now. Whether this will continue will depend on the upcoming economies. Obviously we also need political stability. But the money is there; there are enough people to support this market.