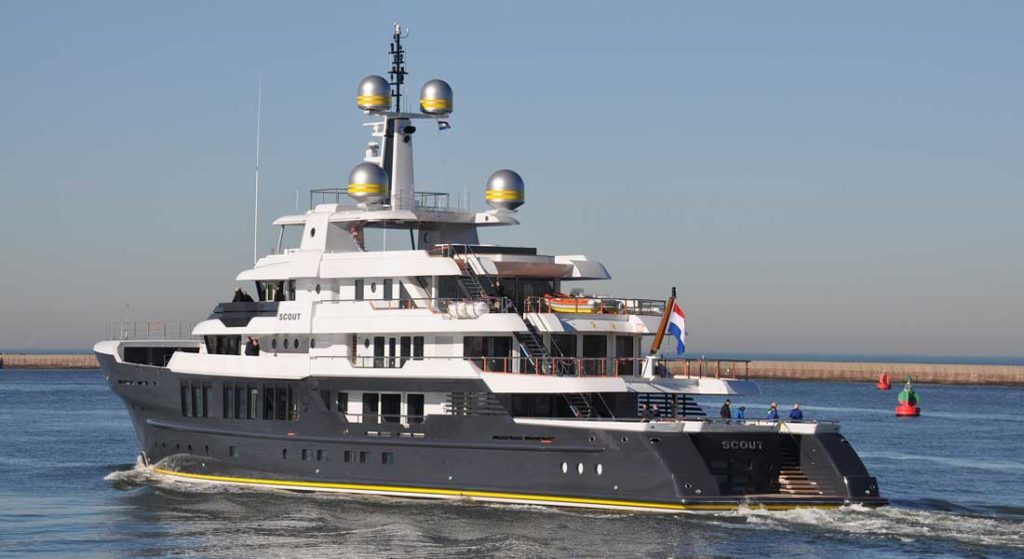 Global cruising is within reach for the owners of Hakvoort’s Scout. The megayacht set out on her initial set of sea trials last week. We finally have a good look at the nearly completed project.

Scout, built for cruising to distant shores, emerged into the public eye a few weeks before the holidays last year. However, the 209-foot (63.72-meter), rugged-looking expedition yacht lacked her uppermost features, as well as some below-the-water gear. Being the largest project thus far from Hakvoort, Scout is so large that she didn’t entirely fit within her build shed. Therefore, the shipyard needed to launch her without her mast (which, if you look closely, contains a crow’s nest), among other things.

The exterior styling brief for Scout was pretty straightforward. Johnny Horsfield of H2 Yacht Design explains that the goal was “a rugged explorer-style yacht intended to look like a conversion from a commercial vessel.” Therefore, the megayacht showcases strong, somewhat assertive lines, along with features like raked pilothouse windows. In addition, unlike traditional white yachts, she situates her tenders on the foredeck, instead of away from view in a tender garage. Horsfield says it enhances “the utilitarian aesthetic.”

As utilitarian as she appears outside, though, Scout is all about creature comforts inside. H2 Yacht Design outfitted areas ranging from an observation lounge to four guest suites, each on the main deck. Details about the woods, stones, and other soft goods are still not available. Regardless, the megayacht definitely reflects how the owners like to live. Their stateroom occupies the full deck above the main deck. They additionally requested two staff cabins accompany the nine crew cabins below decks.

Bearing a beam of 38 feet (11.6 meters), Scout features naval architecture by Diana Yacht Design. She should see a 4,800-nautical-mile range at 12 knots with Caterpillar diesel engines.