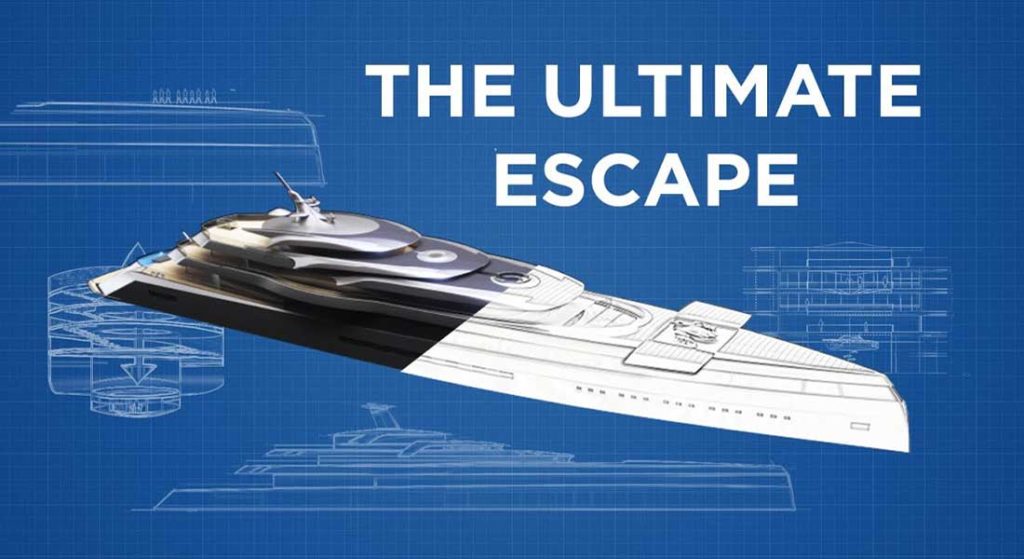 If you have ever dreamed of being a rock star, or escaping from society, Feadship’s Escape is up your alley. It’s a concept design tracing its origins to a group of yachting professionals who visited the shipyard several years ago. Until now, however, the design remained out of the public eye.

Escape is “a very cool briefing,” in the words of Ruud Baker, Feadship’s senior designer. The concept developed out of an invitation to several yacht brokers to have an in-depth visit. Feadship hosted them to give them a more thorough understanding of custom design. They started from pure imagination, yet firmly rooted in the realm of possibility.

The brokers came up with an intriguing client, “a rock star who was also aware of the environment,” explains Jan-Bart Verkuyl, CEO of Feadship. Specifically, this rock star wanted a yacht to, as her name states, escape from the hustle and bustle of everyday life, simultaneously being an oasis where he could grow some of his own food.

The resulting design: a low-slung 361-footer (110-meter) with some fantastical, yet fully buildable, design features. For instance, Feadship’s Escape has an atrium that not only rises through every deck, but also leads down to what the design team calls a “moon pool.” Suffice it to say that the moon pool is unlike anything you have ever seen in a design proposal.

From 1,076 square feet (100 square meters) of solar panels on the foredeck to a super-cool secret submarine landing area, Feadship’s Escape is more than fit for a rockin’ lifestyle.