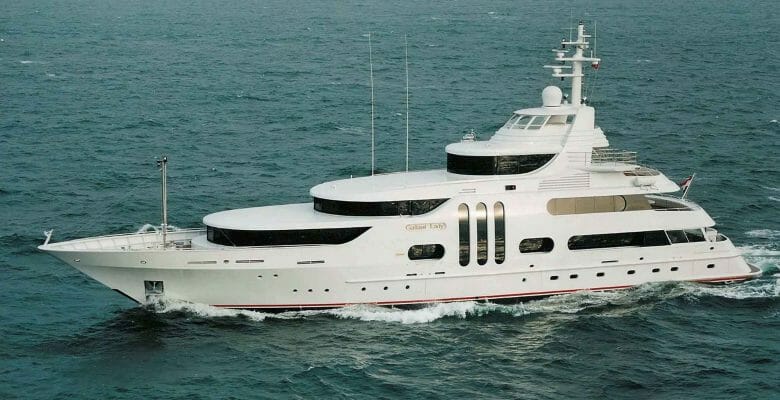 Of the eight Feadship yachts in history to bear the name Gallant Lady, the one from 1996 is the largest. About a year ago, she headed to The Netherlands to undergo some significant work by the same team that built her. In the footage here, Gallant Lady goes home following her Feaship refit.

Although she’s been in other hands over the years, this 172-foot (52.46-meter) Gallant Lady specifically was the seventh Feadship for the late Jim Moran. Moran earned renown as having established the first Toyota dealerships in the United States. He further earned renown in yachting for having a true passion for yacht building. In fact, he owned upwards of 200 boats, yachts, and superyachts in his lifetime. (Moran died in 2007.) For this particular project, he collaborated with Paola D. Smith for interiors and Rick Jorden for styling. The three vertical windows on each side of the superstructure have made the megayacht instantly recognizable since day one. (The photo above is from her original sea trials.)

Under regular, intensive use for private cruising and entertaining since delivery 16 years ago, Gallant Lady was due for some modifications. For instance, at the time of her build, beach clubs simply didn’t exist. The current owners understandably believed one would augment her already social areas. Additionally, they requested a complete change of interior relaxation and entertainment areas. Although Feadship has not specified details, it does add that the refit reconfigured her flying bridge, too. Furthermore, technical systems underwent upgrades to suit current and upcoming needs.

In a word, Feadship considers the refit “intensive.”