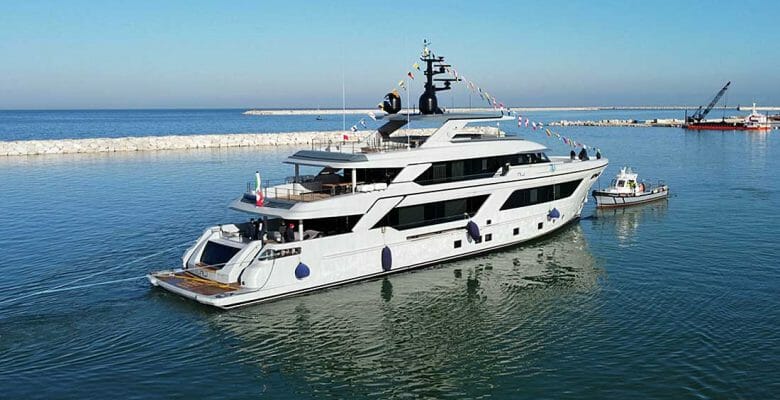 Started under the code name MG129, the 129-footer (39.42-meter) megayacht belongs to a client who previously purchased four yachts from another Italian shipyard. Upon the advice of a trusted advisor, he sea trialed a Cantiere delle Marche build, then visited the yard. He was impressed with the philosophy and the yard’s standard approach of employing cupronickel piping, independent rudders (like commercial vessels), and similarly robust systems. But, since he prefers more yacht-like looks, Vasco Buonpensiere, the yard’s vice president and sales manager, called his favorite stylist, Francesco Paszkowski. Buonpensiere says that within a 15-day deadline, Paszkowski produced a design that met “99 percent” of the owner’s wishes.

According to Paskowski, the owner wanted “an explorer with large social spaces both inside and outside.” Since he plans long-term, long-range cruises, the owner ultimately wanted “the essence of an explorer with peculiar features in terms of comfort and livability.” Lower gunwales than usual on the main deck for an explorer enable better views from outside and inside, for instance. Additionally, Paskowski draws attention to the sundeck, yet another atypical feature for an explorer. Up here, RJ has lounging, sunning, and dining areas, along with a pool. 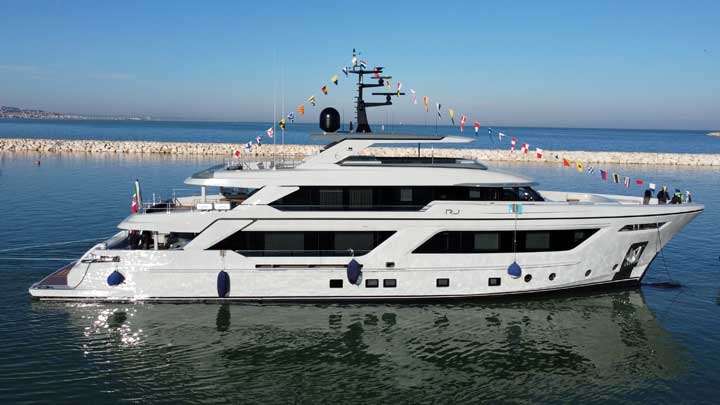 Inside, meanwhile, RJ has accommodations for 12 in five staterooms, including the master suite. Here, he wanted “a welcoming and elegant interior,” according to Paszkowski and longtime collaborator Margherita Casprini. Light and neutral tones contrast with dark tones throughout, with different textures and treatments. For example, you’ll find polished bleached and brushed oak on walls, as well as rosewood and leather panels. Brushed oak is underfoot, too, and matte-finished rosewood reappears on furnishings. This same wood, though polished this time, highlights furnishings outside.

While a games table in the upper saloon will keep the owner and guests entertained, RJ carries a tender for off-yacht adventures. Notably, the tender stows aft on the upper deck, not in a garage. Further notable, her launching system remains concealed within the superstructure until needed. Cantiere delle Marche points to studies of yacht usage showing that tenders stay in the water about 93 percent of the time when owners are onboard. Therefore, the transom is an extra toy-stowage area, including dive gear.

Expect sea trials to confirm RJ capable of a 14½-knot top end and 9-knot cruising speed. Naval architecture is by Hydro Tec. At 9 knots, she should have an impressive 5,500-nautical-mile range, under MTU power.

While the shipyard prepares RJ for delivery, two additional “RJ” yachts are in build. They bear the code names RJ115-28 and RJ115-29. Like this RJ, they, too, were formerly “MG” yachts. “The RJ range of yachts is definitely a game changer for CdM,” Buonpensiere notes.