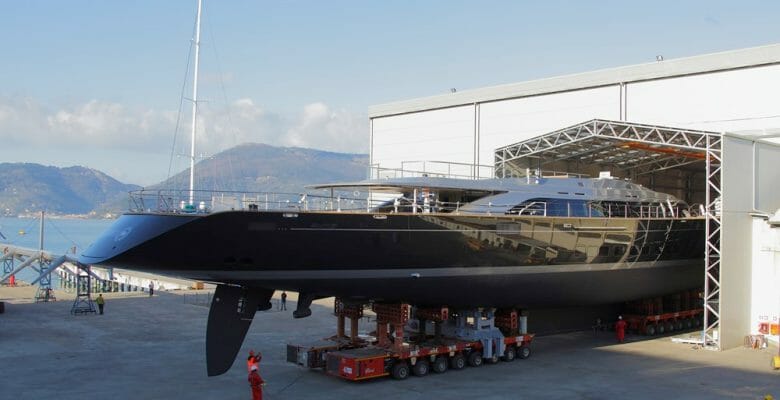 If a court approves, a newly formed Ferretti Group and Sanlorenzo joint venture will rescue Perini Navi from bankruptcy.

The two fellow Italian yacht builders issued a statement earlier today. Specifically, they have formed a new company in which each has a 50-percent ownership stake. Through that new company, they wish to make an offer for a few things. Firstly, they want to acquire the physical shipyards of Perini Navi. They also want its trademarks and overall assets. As an alternative, they will sign a lease agreement for the shipyards, to scale work and employment back up quickly.

“At Ferretti Group we are always on the lookout for excellence and capabilities to integrate with our own,” says Alberto Galassi, Ferretti Group CEO. “We are confident our commitment will translate into further growth that benefits the local area and raises the profile of the Italian yacht industry still further.” Galassi additionally notes that the Ferretti Group and Sanlorenzo joint venture will safeguard suppliers, not just the employees and their families.

Massimo Perotti, executive chairman of Sanlorenzo, notes that his yachting career began the same year that Perini Navi did, in 1983. The two got their starts in Viareggio, Italy, too. “Since then I’ve always had great admiration for the business model adopted by this remarkable brand,” Perotti continues, “boats with outstanding qualities, built exclusively to order for a limited number of expert owners and connoisseurs.”

Furthermore, he says, Sanlorenzo has been interested in keeping Perini Navi solvent since its troubles became public. “Today I am pleased to be able to do so jointly with Ferretti Group,” he comments. “It is an alliance of historic importance for our industry.”

Galassi agrees, saying it reflects “the new spirit of collaboration sweeping through Italy.”

On January 29, an Italian court declared Perini Navi bankrupt, setting the stage for a trustee to safeguard its assets under provisional operations. The operations include two shipyards—one in Italy and one in Turkey—as well as sailing superyachts under construction.

The bankruptcy court in Lucca will review any proposal put forth and issue a decision. Palumbo Superyachts is among potential suitors, too, as reported earlier this month.