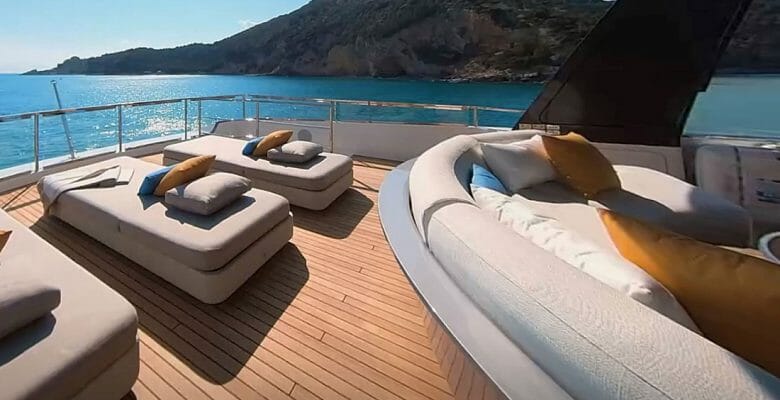 Expanding further into megayacht territory, Azimut has delivered the first yacht of a new 125-foot (38-meter) series, the Azimut Grande Trideck. Despite only revealing the series late last year, it has already sold the next five hulls, too. Judging from this, the “trideck plus one” arrangement, as Azimut’s CEO calls it, succeeds in being more than the illusion of an extra deck.

Marco Valle, CEO of the Azimut-Benetti Group, says the idea for the model originated about three years ago. “We wanted to have a flagship for Azimut Grande,” he explains. It was all the more important, he continues, because Azimut delivered 146 megayachts in the 98- to 131-foot (30- to 40-meter) range between the years 2000 and 2019. Furthermore, Vale says, this sales volume exceeds that of other builders in the same size range and timeframe.

Highlights of the nearly 300-gross-ton Azimut Grande Trideck include a proper beach club and a full-beam upper deck. That same upper deck offers an optional sixth stateroom, too, while the master suite contains a private wellness area. Interior design is by Achille Salvagni, and semi-custom, of course. However, the biggest attraction may be the most readily noticeable one, the above-mentioned plus one. It’s a mezzanine-like area, a.k.a. the Sea View Terrace, a few steps up and aft from the main aft deck. Stylist Alberto Mancini says it lends the Azimut Grande Trideck the illusion of a fourth deck as the levels cascade down. Additionally, the area can be a party area or private area removed from the rest of the main deck. Think dance floor or apertivo time.

The dedicated beach club, remaining partially open-air when the transom closes, augments the Azimut Grande Trideckentertainment space. Strikingly, the yacht also has an expansive main saloon, without a traditional dining area. There’s no dedicated interior dining area, in fact—unless owners choose to raise the table in the aft-facing skylounge.

Since lowering fuel consumption is as much of a priority as design, the Azimut Grande Trideck employs an updated fast displacement D2P hull form. The shipyard says she should burn 15 percent less at 15 knots compared to the Azimut 35 Grande. Interestingly, she should burn the same as that yacht when exceeding 19 knots despite being larger and 30 gross tons more voluminous. Note also that the carbon fiber composite yacht offers a battery bank option for the hotel load. It can run continuously at anchor for four hours during the daytime and double that at night.

Future hulls might become available with hybrid propulsion. In the meantime, hull one saw delivery during the Monaco Grand Prix. You can experience life aboard via an immersive virtual tour on Azimut’s website.