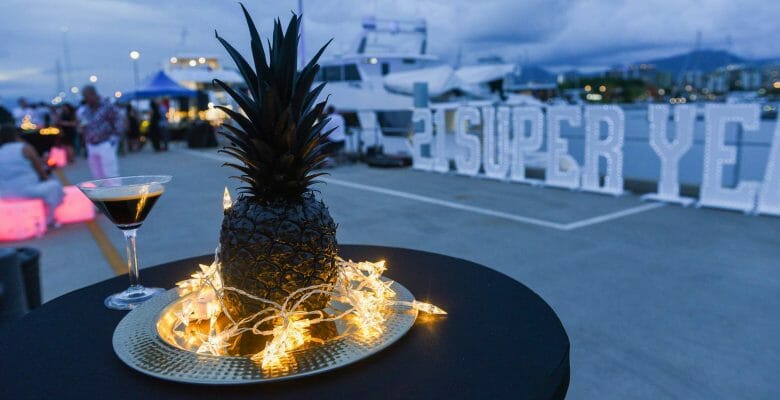 It’s no surprise that yacht owners and guests prioritize tropical destinations. Add in two UNESCO World Heritage Sites, the privacy that comes from seclusion, and solid yachting infrastructure, and even more will visit. Over the past 21 years, the Superyacht Group Great Barrier Reef and its principle destination of Cairns have gone from fledglings to specialists.

It all started in the months prior to the 2000 Sydney Olympics. Two Cairns yachting executives, Ley James and Stewart Smith, believed the Great Barrier Reef belongs on superyacht itineraries. The duo—Ley as manager of Cairns Slipways, and Smith as owner of Cairns Wholesale Paints—formed the group to promote it. Cairns Slipways already had large-yacht refit business, but wanted more, too. “We established Cairns as the South Pacific superyacht hub,” James says of his and Smith’s efforts.

Not that it was easy. James and Smith pounded the docks at the Monaco Yacht Show as well as at marinas throughout Europe. They further handed out boxes of Vegemite, bottles of Bundaberg rum, and other tastes of home to the Aussie crews they encountered. “We had to give it that Australian theme,” Smith says. After a while, American and European owners warmed up to learning more. They’d heard of the Great Barrier Reef and Sydney, James says, but not Cairns and Queensland. “Going south of the equator was like going to the dark side of the moon for them,” he explains. With the help of captains and crew keen to show off their homes, they lured yachts Down Under.

The ensuing years saw suitable marinas and more infrastructures develop, further with government support. James says the Superyacht Group Great Barrier Reef’s efforts have paid off. “We’ve gone from superyachts of 50 to 60 meters to megayachts and gigayachts,” he notes. “Some are up to 500 to 600 feet and worth half a billion dollars.”

Cairns is particularly a busy Australian superyacht port. “We have the only place where two World Heritage Sites meet,” notes Joanne Drake, Superyacht Group Great Barrier Reef’s manager. Specifically, the sites are the Great Barrier Reef and the Wet Tropics Rainforest. Drake additionally expects post-COVID visits to double. She notes “mind-blowing diving and snorkeling sites,” for instance, plus “every piece of infrastructure you could need.” The international airport and the South Pacific’s largest mobile boat hoist, both in Cairns, are part of that infrastructure.

Bill Millett, a Superyacht Group Great Barrier Reef board member, believes Australia’s relative isolation is a huge draw as well. “A growing number of wealthy individuals don’t just want to be sitting at the likes of Monaco or on the Riviera,” he notes. “They’re keen to see the parts of the world that aren’t the traditional cruising grounds.” More so, Millett says, they want to be “the only boat in the bay and enjoy what our natural environment has to offer.”