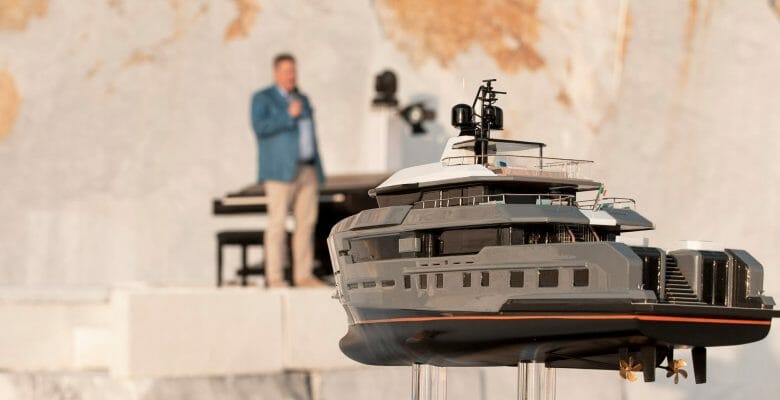 Come December, the CCN shipyard in Italy will lay the keel for Dream 42, a megayacht exclusively for Floating Life. Offering shares in a fractional-ownership program, the yacht has already lined up three takers so far.

Dream 42 has the same technical platform as the FL Anniversary Series, which Floating Life revealed last fall. That succession of superyacht models pledges a range of 5,000 nautical miles, plenty for ocean crossings. Each further has a deck beneath the lower deck for the engine room, freeing leisure space above. Floating Life’s CEO, Andrea Pezzini, designed the platform himself, with Satura Studio and Zero13 (the latter for the hulls).

The company revealed the contract for Dream 42’s construction, and the three ownership shares, this month during its 20th anniversary celebration (top). Among the creature comforts of the 138-foot (42-meter) Dream 42 is direct access from the guest staterooms to the extensive, open-air beach area. Additionally, the yacht has seven staterooms. Furthermore, six alfresco areas allow the full guest head count to spread out and still enjoy privacy. These alfresco spaces include a hot tub fully forward on the sundeck, sunpads aft on the main deck, and an observation settee nestled against the wheelhouse.

Floating Life simultaneously has kept the crew’s needs in mind. For instance, the under lower deck has space for a laundry room or extra stowage. The corridor from the guest quarters to the beach area lets the crew reach guests outside swiftly, too.

In reflecting on the upcoming start of construction, Pezzini says, “It is something of a finish line for us because it is the result of previous very fruitful collaborations. At the same time, however, it is also a starting point because it means we share the same vision of the future.”