Home / Yachts / Sailing Yachts / Ethereal Is Quite the Ketch 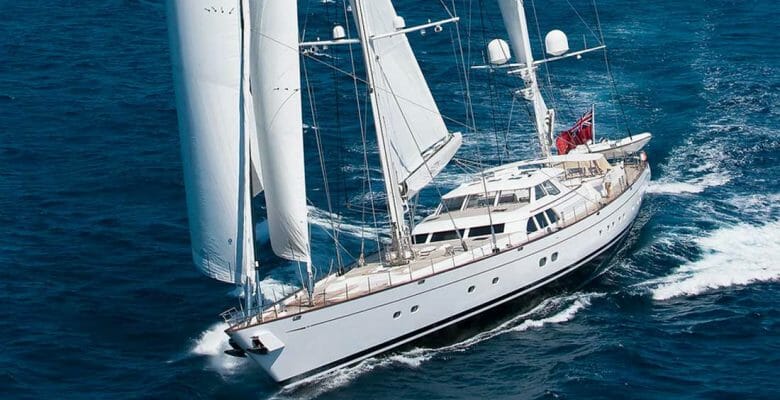 Leave it to the former head of Sun Microsystems to commission a yacht where touchpad screens operate the lighting and other systems, much like the iPhone. This is Ethereal, the 58-meter (190-foot) ketch commissioned by Bill and Shannon Joy from Royal Huisman, which recently completed her maiden voyage from Holland to the Canary Islands and back.

Touchpad controls are nothing new. But, other technologies onboard certainly make her, in Bill’s words, “a floating lab.” The Joys’ project-management team and the yard developed solutions for energy efficiency and flexible energy management. They wanted to reduce operational costs as well as the yacht’s environmental impact. Some of these solutions are far more complex than any measures to date on a megayacht, either power or sail.

One example: the hybrid propulsion system. Two Caterpillar C18s paired with 300-kW Combimac electric motors/generators. A veritable brochure could cover how the system works, but in a nutshell, it’s unlike a typical diesel-electric system. The drive train doesn’t use the electric motors as the principal method of turning the drive shaft. Instead, the motors can serve as gensets to recharge a litium-ion phosphate battery bank. Alternately, they can serve as electric motors to turn the propellers, by drawing power from the traditional gensets or batteries.

Speaking of the gensets, the setup onboard Ethereal is yet another example of energy efficiency and management. While every yacht uses these units to run the “hotel load” (lighting, air conditioning, etc.), Ethereal doesn’t need to use hers. Instead, she can tap the batteries, which reportedly have double the storage capacity of conventional gel batteries. Therefore, if the Joys pull up alongside the yacht in the tender, they won’t inhale exhaust gases. In addition, when the power need is high, only one of the two 90-kW gensets has to operate, with the battery bank. That kilowatt level is nearly half of what a yacht this size would typically feature. It’s also worth noting that the electrical system permits replacing a genset with a fuel cell in the future.

There’s a good deal of automation onboard Ethereal, from the way the mainsail hoists via wireless remote – giving crewmembers better visuals in the process – to the push-button, hydraulically operated crow’s nest. There’s even a “station-keeping mode,” much like dynamic positioning, allowing the yacht to remain on point through synchronized control of her thrusters, engines, and rudder.

The application of technology extends to the interior, too. Royal Huisman “cocooned” the accommodations in insulation to protect against heat from systems and sea temperature. This, therefore, reduces air-conditioning needs. The materials used and the way they were applied resulted from research into other industries, such as refrigerated transport. Even the windows help reduce heat transfer, as their solar reflectivity is controllable.

You could say that the cocoon concept applies to the layout, too, as a calming, traditional ambiance designed by Pieter Beldsnijder envelops the Joys and their guests. Rooms flow from one to the other, and a handful of intimate spaces like a study permit privacy. “We prefer Zen to ornate,” explains Bill Joy. Even though “you don’t have to put any art on these boats, the boat itself is the art,” he says. He and Shannon are quite pleased with the woodwork, too. “When you go to Royal Huisman, you would be foolish not to let them express all their skill,” he comments.