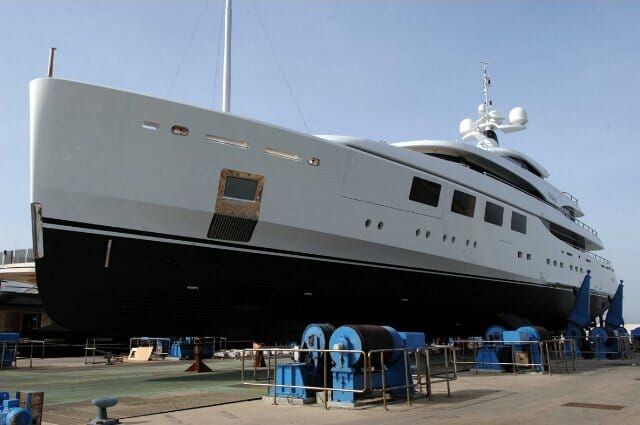 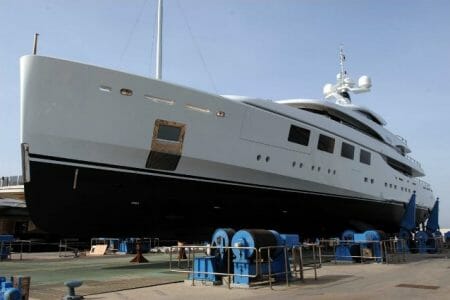 You’re looking at the first Benetti to feature a plumb bow. This is just one of the highlights of the new launch Nataly, which slipped into the water outside the builder’s Livorno, Italy facility last week.

Nataly was originally commissioned as Amnesia IV, for a repeat client of and investor in the shipyard. She changed hands in February, acquired by yet another repeat client. That owner had purchased a Benetti Classic 120, launched in 2006.

Nataly is certainly a step up in size, measuring 65 meters (213 feet). She features styling and interior design by Redman Whiteley Dixon (RWD), who not only suggested the plumb bow but also the floor-to-ceiling windows marking the saloon. The overall goal was to make her “much more architectural than many boats of this size,” Toby Ecuyer, RWD’s creative director, explains. The design team certainly succeeded: Compare Nataly’s profile to that of previous Benettis designed by Stefano Natucci, and there’s a distinct difference. 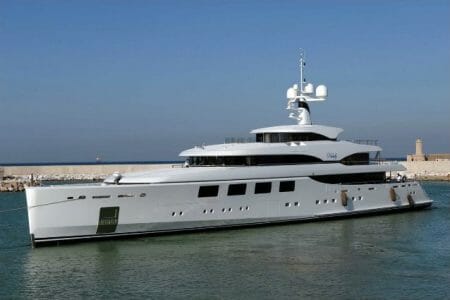 Given that ownership changed just two months before launch, the interior arrangement remains the same as contracted. There are five staterooms for 10 people, plus a crew of 10, making for an enviable crew-to-guest ratio. Between the 11.75-meter (38-foot) beam and decor finishes and materials, chosen to suggest a high-end hotel, Nataly should provide a comfortable environment.

She should also be a comfortable performer. Twin Caterpillar 3512Bs are expected to push her to a top speed of 15 knots. At 12 knots, she’s anticipated to have a 5,000-nautical-mile range. Roll stabilization and other customary systems are also provided.

Built to ABS class, Nataly will be delivered this summer.