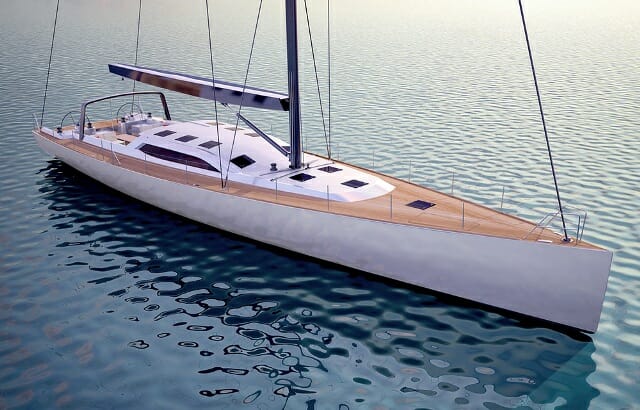 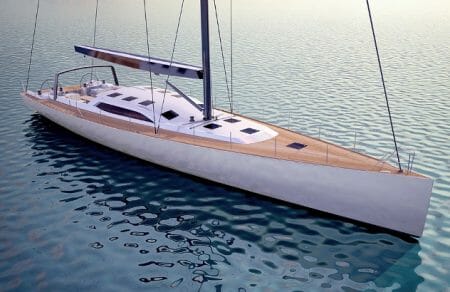 When Sleighride launched in 1996, she was one of the fastest, most extreme sailing yachts of the decade. She’s about to undergo a refit that will see her gain five feet and a new look from Adam Voorhees, marking the first build project from the young, award-winning designer.

Voorhees, a California-based designer whose concept project Ra garnered him the Young Designer of the Year Award at the World Superyacht Awards in 2010, was tapped for the refit by Sleighride’s new owner. California-based Westerley Marine, which builds and refits high-performance racing and cruising boats from 40 to 100 feet, is performing the refit. If you’re a racing aficionado, you may recognize one of Westerley Marine’s previous projects, the refit of Pyewacket in 2007 so that she could break the Transpac Race record that same year.

The refit will see Sleighride be stretched from 77 feet to 82 feet (23.5 meters to 25 meters). In addition, Sleighride will gain automated sail-handling systems for solo operation, and a new interior design (see the rendering below) that invites family and friends to sit back and relax. The saloon will be the focus inside, fitted with custom seating areas and a navigation table. Her sail area, 2,465 square feet (229 square meters) will remain the same, as will her construction materials. There’s extensive use of carbon fiber in her hull and superstructure, along with foam and balsa coring, all to save weight. The masts employ carbon fiber as well, while titanium comprises the deck hardware. 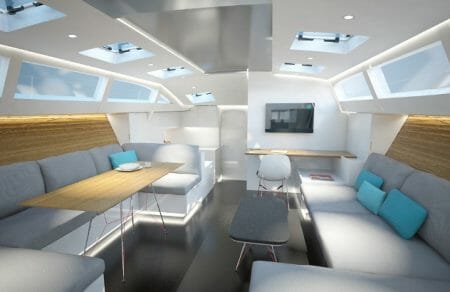 The story behind Sleighride is intriguing. She was commissioned in 1996, designed by Sparkman & Stephens and built by Goetz Boats (then known as Derecktor-Goetz Yachts). Goetz has long been known for its expertise with racing yachts, including 10 America’s Cup competitors, and with carbon fiber construction. The owner who commissioned Sleighride was Thomas Gosnell, who also owned the famed sailing superyacht Timoneer. He reportedly saw a speedy, 70-foot sailing yacht pull into the harbor and was so impressed that he wanted his own version. Specifically, he wanted an ultra-light, ultra-fast daysailer that would make racing boats blush. How? Read this excerpt from Sparkman & Stephens’ records:

The design brief for SLEIGHRIDE was so extreme that when she was launched, Lloyds initially declined to insure her offshore. Despite this, she has proved her ability offshore on passage from Boston to New York at high speed, literally flying through or almost over the water. This marvel of technology exceeded 23 knots on her first day out in Narrangansett Bay and might well have gone much faster if she had not been carrying 25 people on board for the trial! SLEIGHRIDE is so efficient that she can manage 10.5 knots beating into 7 knots of true wind.

One more bit of trivia about Sleighride’s origins: Her name comes from what whalers in New England used to call a “Nantucket sleigh ride.” It’s not the enjoyable trip you may think. It was the result of a whale dragging a whaling boat across the water.