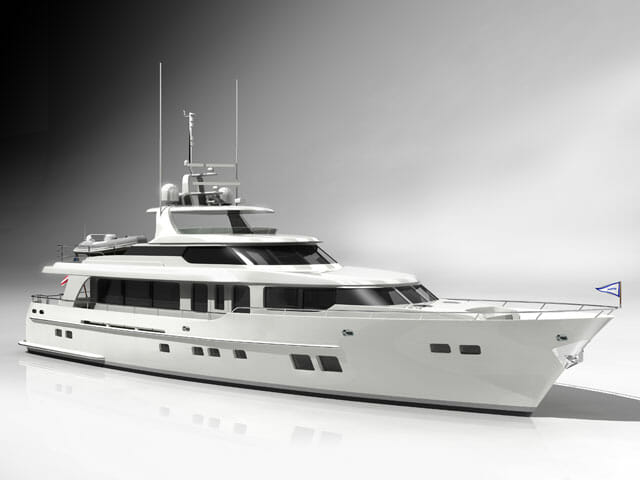 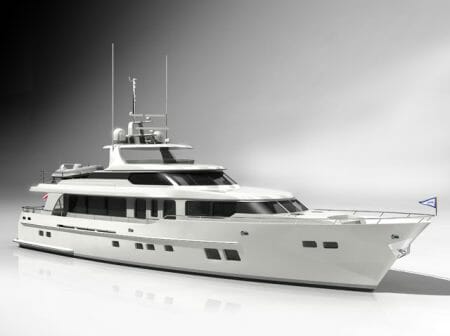 Who says you can’t go home again? With this 97-foot design created in conjunction with Vripack, Burger Boat Company is returning to a successful size range.

Indeed, Burger builds such as Windrush, Lady Pat, and Best ‘N Show were all delivered between the late 1990s and early 2000s and measured in the 95- to 100-foot range. Go back even further in time, even to the 1960s, and Burger launched more similar-size, fully custom megayachts. These days most 97-foot megayachts are production-oriented, so Burger and Vripack are targeting a clientele who crave customization.

They’re also targeting a clientele who like more traditional looks. One of Vripack’s designers, Robin de Vries, says that the team looked back at the classic Burgers to incorporate some of those design elements. The square nature of the hull and superstructure ports falls into that category, as does the bow flare. But the fixed hardtop and the panoramic windows bring the Burger 97 more into modern times, too.

The interior of the Burger 97 mixes modern with classic as well. All staterooms are below decks, including a full-beam master with his and her heads. There are also two guest cabins and a VIP, the latter having its own entrance from the main deck. As for the main deck, the ever-popular country kitchen is fully forward. In a nod to modern-day work necessities, there’s an office aft, toward the saloon. And in a nod to the work necessities of the crew, there are walkaround decks aboard this nearly 24-foot-beam boat. 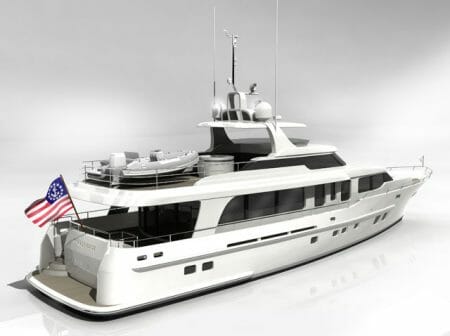 An anticipated 20-knot cruising speed, based on Caterpillar C32 power, should bring plenty of coastal communities and island regions within reach of the Burger 97. Once at the destination, the crew can launch a 20-foot tender or two PWCs, stowed aft on the flying bridge. Guests can board the toys from the swim platform, or jump into the water from the platform to their heart’s content.

The Burger 97 will feature all-aluminum construction and be built to ABS classification.

To obtain more details on the Burger 97, fill out our contact form.