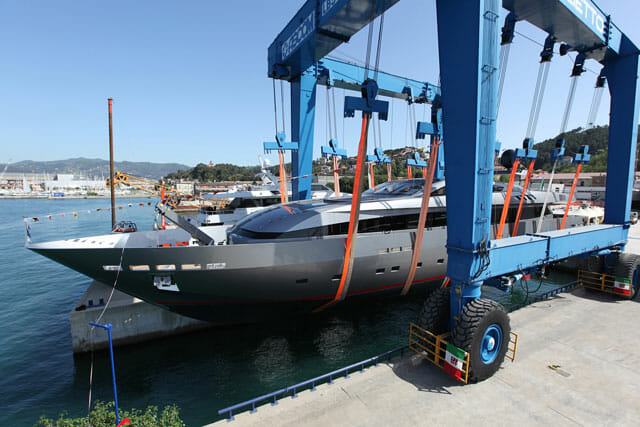 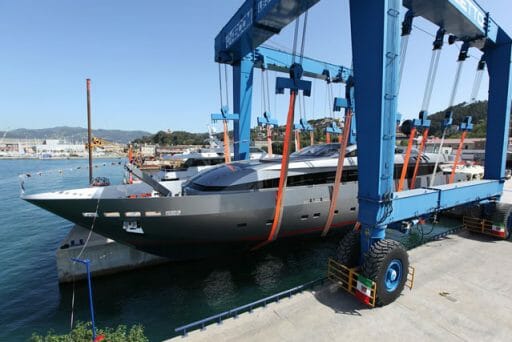 While a megayacht launch is always a time for celebration, the launch of Monokini at Baglietto over the weekend was particularly a happy time for the Italian yard. The 144-foot Monokini, the third hull in Baglietto’s 44-meter Fast series, is the first megayacht to be lowered into the water under the ownership team that took over early last year.

Baglietto, founded in 1854, had filed for bankruptcy a few years ago and came close to being acquired more than once during that time, only to see setbacks occur. It finally emerged from bankruptcy in February 2012 thanks to the Gavio Group and has seen both new contracts get signed as well as an investment in its facilities, the latter including an expansion. All of this made Monokini’s launch all the more important, and it was even noted by Baglietto’s management team in their thank-you speeches to the owner. Diego Michele Deprati, Baglietto’s CEO, referred to the megayacht’s launch as a “milestone” and a “rebirth of this glorious brand.”

As for Monokini, she bears a 27’2” (8.3-meter) beam and is an all-aluminum build bearing styling by Paszkowski Design. Inside, designer Alberto Mancini of AM Yacht Design sets a soothing, contemporary atmosphere that’s said to have been based on private-jet interiors. There’s bleached sycamore for both wall paneling and overheads. It’s complemented by ash and wenge parquet soles. Naturally, there’s further good use of leather and lush fabrics, all in muted tones of beige, cream, and gray and highlighted by special lighting designs.

Also naturally, in keeping with current trends worldwide, Monokini has fold-down balconies to each side of the saloon for the owner’s party of 10 to enjoy. And, in keeping with the “fast” concept of Baglietto’s Fast series, Monokini can reportedly top out at 30 knots, powered by twin 3,600-hp MTUs.

You can see the RINA-classed Monokini yourself if you’ll be at either the Cannes or Monaco boat shows later this year, since Baglietto will have her on display.