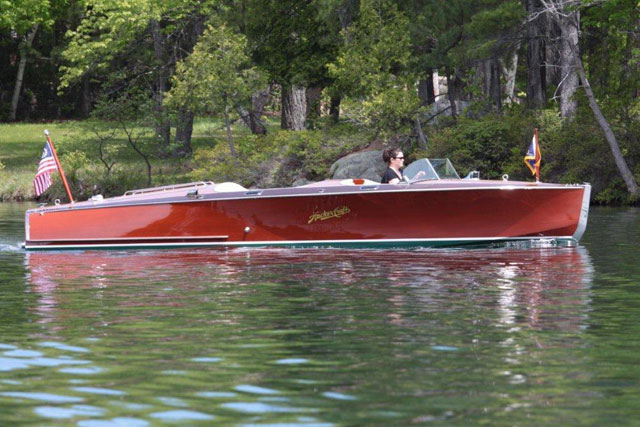 Hacker Boat Company and its all-wood Hacker-Craft brand are well known on both sides of the Atlantic, used as primary boats for some, but also tenders for a number of megayachts. The company dates to the early 20th century, established by famed speedboat naval architect John L. Hacker in Detroit, Michigan. Today, Hacker-Crafts are built in upstate New York, along the shores of Lake George. To see one of their boats and learn how they’re built is like taking a step back in time. 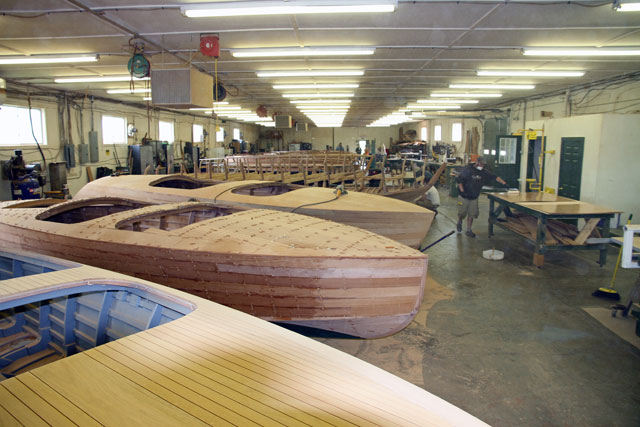 From day one, Hacker Boat Company has built its craft of wood. It remains the only wood boatbuilder in the world constructing craft on a production line basis. While oak and cedar were the materials of choice in the early days, for the past few decades, it’s been mahogany—triple-planked. Modern epoxies make the boats sturdy. It’s all topped off with14 coats of varnish. 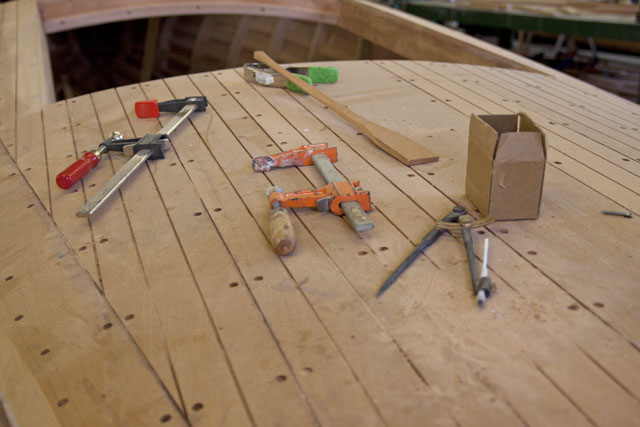 You might think that wood—and highly varnished wood, at that—makes a Hacker-Craft too high-maintenance for saltwater environments. Not so. Famed megayachts like Christina O and Talitha G toted Hacker-Crafts aboard for years (Christina O still does), and plenty of Hacker-Crafts ply the waters off Florida. Indeed, George Badcock, the CEO of Hacker Boat Company, says South Florida is its hottest market, particularly for the Sport models. There’s even a showroom near the Fort Lauderdale airport, complementing the longtime showroom in Silver Bay, New York. 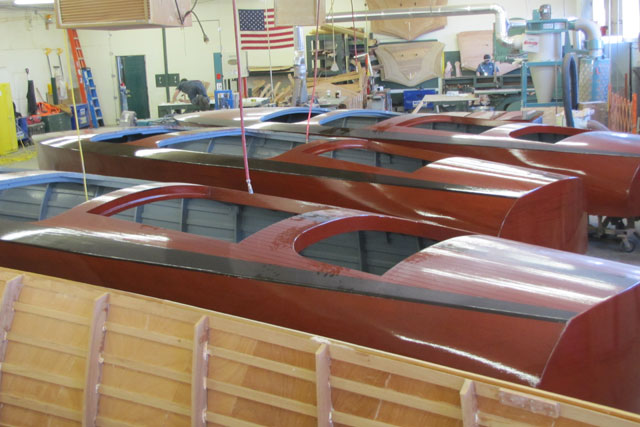 It takes about 2,200 man-hours to build one Hacker-Craft Runabout (24 to 35 feet) and 2,500 to 2,700 man-hours to build a Sport model. That works out to be six to eight months for either model, with the Sport boats taking longer due to more detailed features. Hacker Boat Company welcomes buyers to customize either model, too. Some owners have requested small deckhouses (varnished wood, of course), while others have asked for guest cockpits forward of a driving cockpit, the reverse of the norm. One owner recently took delivery of a fully custom Hacker-Craft in the 40-foot range for his new megayacht, nearing completion in Germany. 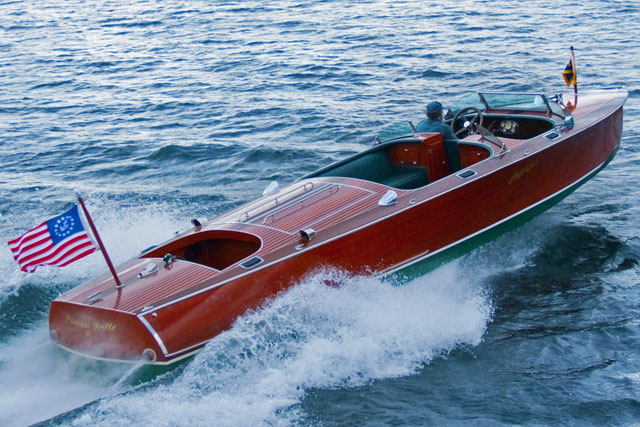 Here’s a Hacker-Craft Runabout with a triple-cockpit configuration; twin cockpits are also available. This particular runabout has an extended second cockpit, one of the many ways to customize your boat. Regardless, you’ll appreciate knowing that when John L. Hacker first designed and built the runabouts, they earned the nickname the “Steinway of Runabouts,” a moniker that remains to this day. 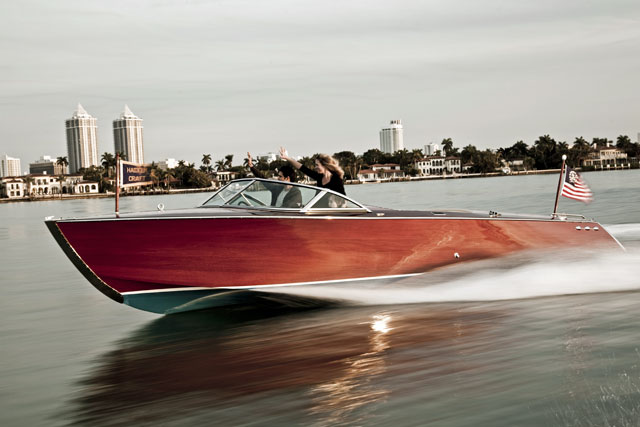 This is a Hacker-Craft Sport model. While she retains the classic styling penned by Hacker himself, she also incorporates more modern touches, like built-in transom steps and a swim platform. Buyers often use Sport models for waterskiing and swimming.

In 2012, Hacker Boat Company partnered with the clothing company Tommy Bahama for the Tommy Bahama Edition, a 27-footer based on the Sport series. She’s still all mahogany, though with a darker stain akin to fudge, versus walnut for the standard boats. There’s also monogramming on barware, leather seating, and more. We went for a sea trial on Lake George this summer and found her smooth and steady, easily rising through the speed range and carving turns on a dime. Top end: 45 knots. 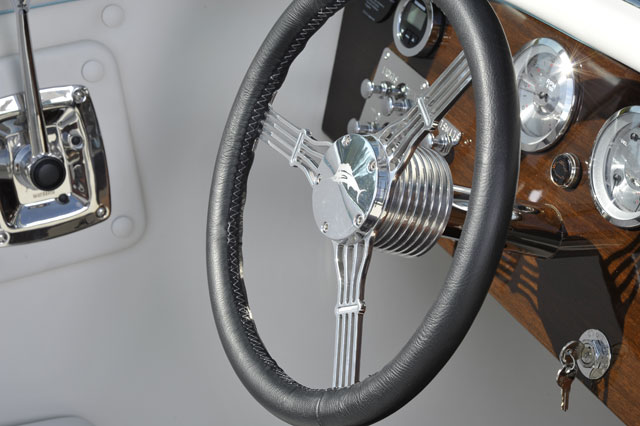 Even the wheel of the Tommy Bahama edition is special, with a marlin logo. Otherwise it’s much like the wheels of the other Hacker-Craft, resembling an early-20th-century Ford automobile steering wheel. Why? John L. Hacker was good friends with Henry Ford. Legend has it Hacker even asked Ford where to put the wheel on his first boats. Ford reportedly said, “Do what I do, put it on the left and the dash in the middle.” 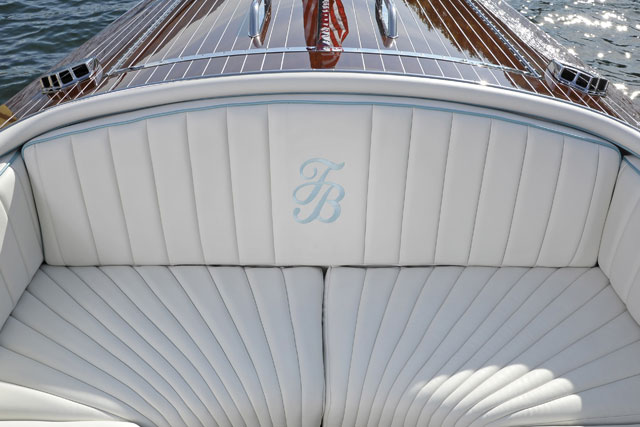 The blue monogram here on the Tommy Bahama Edition seating is the same tone that the clothing company uses in its branding. The overall look of the model has caught the attention of several buyers. Hacker Boat Company says one client loved everything about the boat except the LOA, so he commissioned a replica measuring eight feet longer.

For more information directly from Hacker Boat Company on the Tommy Bahama Edition or its other models, fill out our contact form.