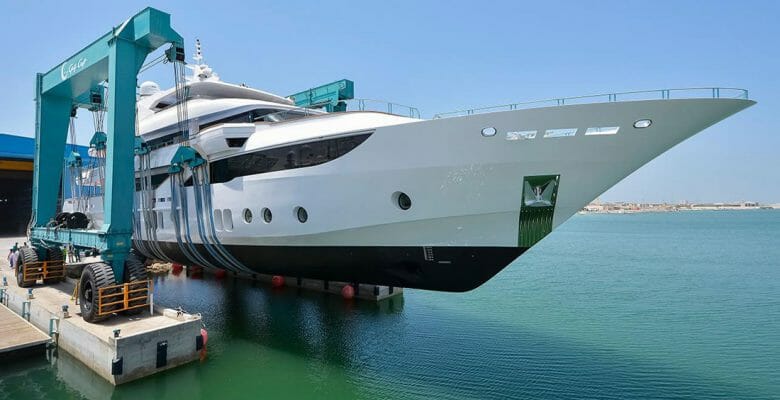 Increasingly in recent years, Gulf Craft has been fielding inquiries from its customers for bigger boats. They want the same things other builders’ clients request: more entertainment and relaxation space, and more privacy. Gulf Craft’s all-fiberglass fleet starts at 27 feet and rises up into megayacht territory, with the Majesty Yachts brand primarily addressing the latter. The Majesty 155 marks the seventh megayacht measuring 80 feet (24 meters) or larger being offered. She is further the first displacement yacht in the lineup.

High-luxury outfitting is a hallmark of Majesty Yachts, and the Majesty 155 follows suit. A good deal of marble and onyx are featured in the master suite, for example. (Photos are not yet available of the interior.) As you would expect, soft goods like leather also feature prominently. In keeping with current trends, the suite additionally has a balcony. The highlight of the suite, though, is arguably the cigar lounge. The overhead is even covered with treated cigar leaves. Guests are treated to luxury touches in their areas aboard the Majesty 155 as well, of course. Their staterooms below decks are adorned with red and green marbles. Everyone gets to enjoy a fountain on the sundeck and a waterfall spilling down from the sundeck to the hot tub aft on the upper deck. And, they further get to enjoy the beach club, containing a lounging area, pantry, and retractable television.

Sea trials should be conducted on the Majesty 155 shortly. Gulf Craft expects to confirm a top end of 16 knots. At a best-cruise speed a few knots slower, the Majesty 155 is anticipated to see a range exceeding 4,000 nautical miles. The megayacht is powered by twin 2,011-hp MTU 12V 4000 M63 diesels.

Expect Gulf Craft to showcase the Majesty 155 at upcoming yacht shows. In the meantime, a second Majesty 155 is under construction. It’s worth noting that both hull number one and hull number two started on spec, with the first sold a few months into the build process.