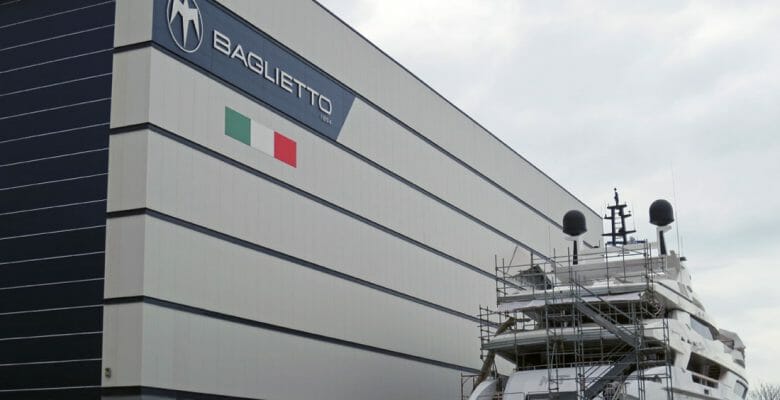 Since being acquired by the Gavio Group three years ago, Baglietto has undergone a rejuvenation. Its facilities, located in La Spezia, Italy, have been expanded. The sheds are filled with new-build yachts and megayachts, a mix of planing and displacement designs. Customers’ megayachts are back, too, for winter service.

It’s also quite a change from the early days of Baglietto, which dates back 160 years. Pietro Baglietto established it in his backyard—in the midst of a vegetable garden. Dinghies and small fishing boats were the first launches. Pleasureboats and military craft followed, with motoryachts coming at the start of the 20th century. In fact, the shipyard made history in 1906 by launching the largest cruising yacht in the country fitted with a combustion engine. Giuseppina, as she was christened, measured 74 feet (22.6 meters), an astounding size for her era. On an interesting side note, Pietro Baglietto even built a pleasureboat for the Pope many years prior, in 1888.

While the modern-day Pope isn’t a client, of course, current clients do hail from Italy—as well as the United States, the Middle East, and other regions. Many are familiar with the history of the “Seagull Brand” (the Baglietto logo is a seagull). During our visit in early December, we saw six megayachts from 141 to 177 feet (43 to 54 meters) under construction. Their delivery dates span from early 2016 into 2018. 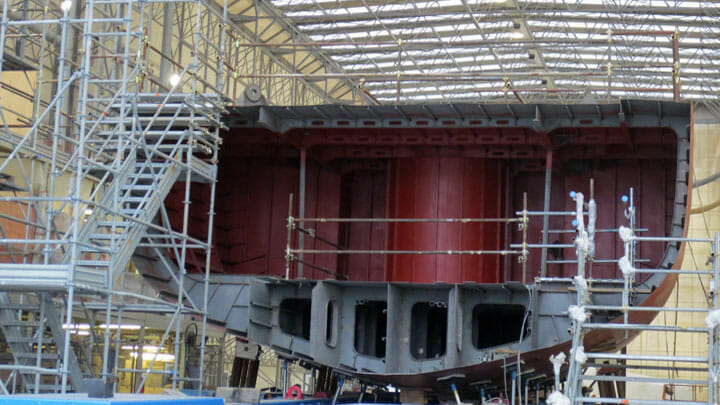 The first to hit the water will be a member of the 46M Fast series, an all-aluminum planing yacht. She’s set for launch this coming March. Shortly thereafter, a 171-foot, steel-and-aluminum displacement megayacht launches. Come 2017, the 158-footer (48-meter) seen above will be delivered to her owners. She, too, has a steel hull and aluminum superstructure. The aluminum superstructure is not visible in the photo, due to being assembled in another shed simultaneously as the hull construction completes.

Baglietto may be best-known for megayachts like these, but it has other business divisions, too. A “small” project, hull number one of the MV19 series, is underway. This 64-footer (19.5-meter) bears styling and interior design by Francesco Paszkowski. Paszkowski is collaborating with Baglietto on a number of its builds these days, including megayachts. While clearly not a megayacht, the MV19 is a larger version of another yacht. She’s the MV13, which premiered at the Cannes and Monaco shows earlier this year.

Baglietto is remaining faithful to its roots in the military sector, too. Last summer it created the Baglietto Navy division. It’s constructing small- and medium-size craft for coastal patrols, enemy engagement, and even ambulatory operations.

All of this is indeed quite a change from Baglietto’s beginnings. And it’s proof that change is oftentimes good.