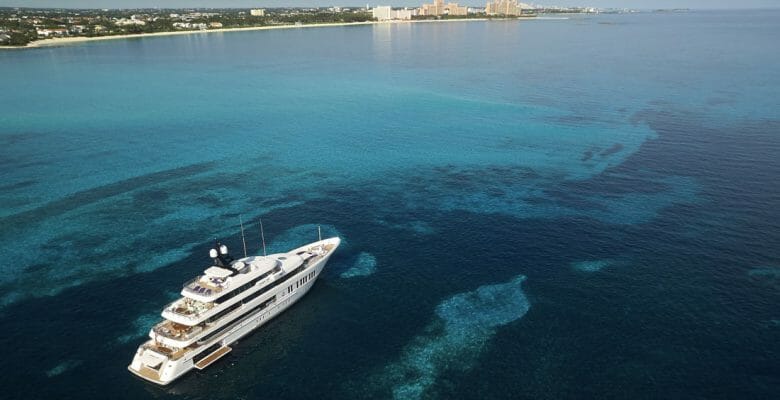 Just J’s marks a few milestones for Hakvoort. They go beyond the fact that the 200-footer (61-meter) is its biggest megayacht thus far. Just J’s signals the Dutch builder’s steps toward courting significant-size yacht buyers. She proves the yard made the right move in extending its facilities a few years ago. (Even if it meant cutting a hole in the build shed roof, to lower the elevator for Just J’s down into place.) And, she proves there’s more to building a big boat than simply more aluminum and steel.

The backbone of every yacht is her engineering. The LOA and volume of Just J’s necessitated stricter standards, dictated by Lloyd’s classification. Consider that volume is well more than 500 gross tons, spread over five decks. Hakvoort’s in-house team therefore had to take piping and related components to a higher level. Piping, ducting, and cabling was impacted as well by the floor-to-ceiling windows.

Those, in turn, required the yard’s subcontractors to step up. The owners of Just J’s and the stylists at Sinot Exclusive Yacht Design wanted these huge panes to be curved in some areas. (Naval architecture for the project is from Diana Yacht Design.) Classification societies require glass to withstand set levels of pressure, from both water and weight load. To meet Lloyds’ requirements for Just J’s, Hakvoort tapped two specialists. One, which typically manufactures mirrors for the yard, supplied the glass. A separate firm ensured it would have the right bowed form. 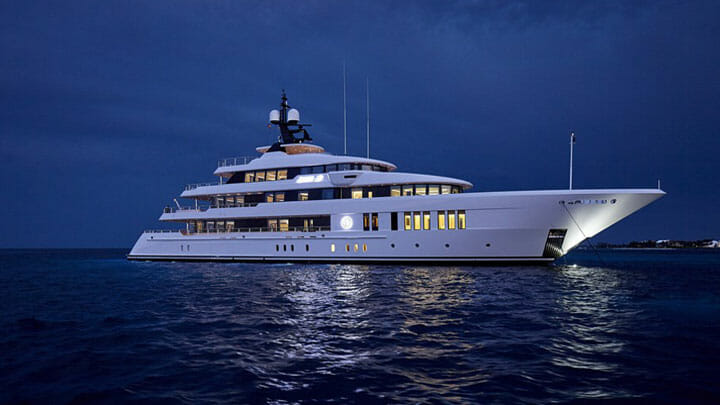 All of these efforts come together aboard a megayacht with a modern, relaxed vibe. “The owners wanted to create a yacht atmosphere combined with the informal feel one finds in beach houses,” says Paul Costerus of Sinot Exclusive Yacht Design. Each deck aboard Just J’s has its own color theme, yet, taken together, they don’t feel incongruent. Rather, all interior lounging areas, the five main-deck staterooms, and the owners’ private retreats share elements like woods and fabrics.

Let’s get back to those five staterooms for a moment. VIPs, even one or two guest staterooms, are increasingly moving to megayacht main decks. But accommodations for 10 there, in a VIP and four ample guest cabins? The captain of Just J’s puts it best by saying everyone is made to feel as if he or she is an owner for a day (or several). The two remaining guest staterooms aboard Just J’s, below decks, don’t suffer. The queen cabin (the other is a twin) could easily be considered a VIP. It has its own hallway, plus a separate head off the hall.

As you would expect, the owners of Just J’s created a floating haven for themselves. They have much of the deck above the main deck. Their suite includes a gentleman’s-club-like lounge with a bar. Fully forward, their stateroom is rimmed with ports. Even while in bed, they can feel as if they’re outside. A skylight (below) sits amid the domed overhead. Breakfasts are all the more enjoyable thanks to an alfresco dining spot. (A pantry back by the lounge has a dumbwaiter from the galley.) They get to enjoy a hot tub out here, too. 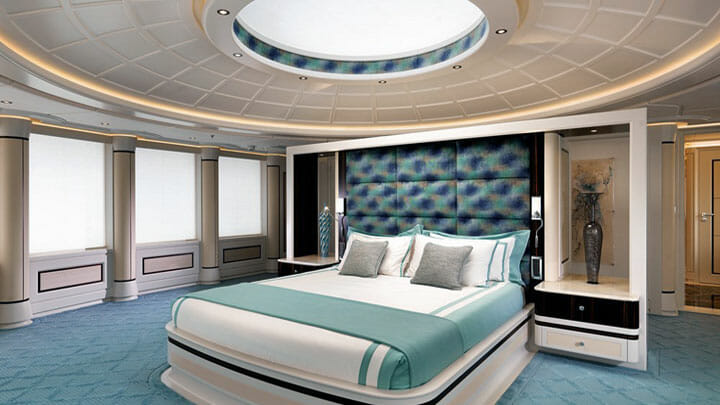 Time with family is a priority aboard Just J’s. The sun deck’s pool has colorful tiles depicting an underwater scene. The owners designed it themselves. Movie nights and more take place in the bridge deck lounge. The same tones of greens and blues inside carry through to the outside, where there’s more space for everyone to gather together.

The crew’s areas were just as strongly considered aboard Just J’s. The owners actively sought to make their work, and rest, easier and more enjoyable. Six of the eight staterooms have en suite heads. The chef raves about being able to make everything from bread to beef jerky, plus the stowage. The chief stew appreciates having the crew mess and laundry one deck below the crew cabins, over noise concerns. The same is true for the galley, plus the odors (as wonderful as they may be) emanating from it. The room is at the opposite end of the hall from their cabins.

Take a self-guided tour of Just J’s in our photo gallery.