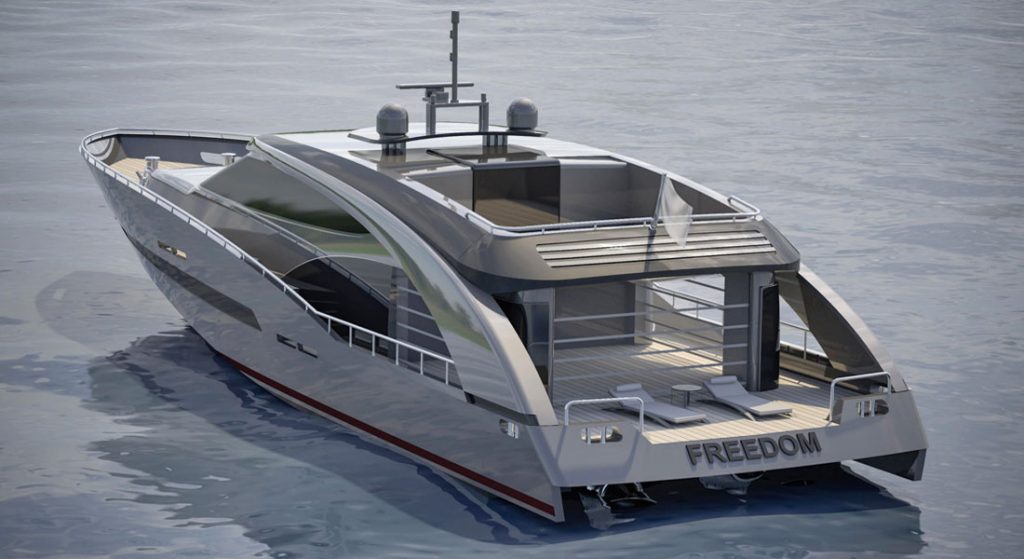 Earlier this year, CCN revealed it had signed a fully custom megayacht, adding somewhat cryptically that the owner was a famous Italian fashion designer. Now we know who that designer is, along with more about on the megayacht herself. Roberto Cavalli will christen the 88-footer (27-meter) Freedom upon launch.

CCN previously announced the project simply as the 27M Fuoriserie. In Italian, “fuoriserie” loosely means “custom built.” It refers to custom cars that really stand apart due to high-end details and their overall composition. The fully custom Freedom will stand apart for CCN, given that all of its projects so far are semi-custom.

Freedom will further stand apart for her styling, and performance. Design Studio Spadolini interpreted Cavalli’s requests for the profile you see here. Suffice it to say that most 88-footers—indeed, even larger megayachts—don’t look like this. Tomasso Spadolini of the eponymous design studio and CCN additionally are ensuring that the megayacht will see a 40-knot maximum speed. The triple-engine propulsion package includes waterjets, too. 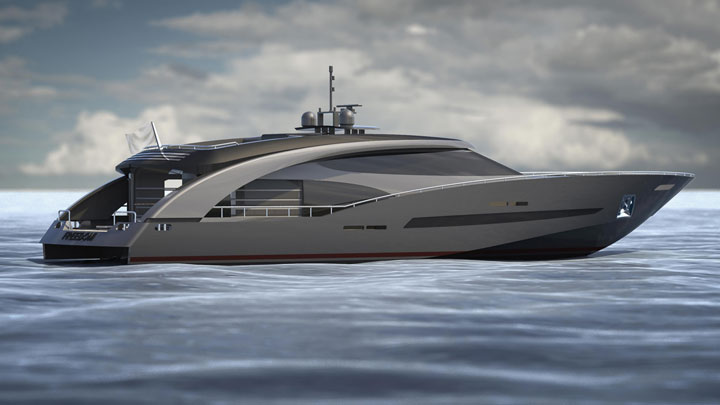 Unfortunately, CCN is not releasing images of what Cavalli himself is designing inside. However, as previously revealed, Cavalli is truly taking the concept of custom construction to heart. For example, the master suite will take up nearly the entire main deck. We say “nearly” because the primary helm is here as well. (A second helm sits up on the flying bridge, naturally.) It’s easy to imagine the ambiance aboard will be relaxing, and private, since Cavalli will have curtains fully aft where the stateroom meets the aft deck. Furthermore, Freedom will have just two guest staterooms onboard, both below decks.

Look for Freedom to start cruising with Cavalli onboard next summer.

Meanwhile, Freedom isn’t the only fully custom megayacht on CCN’s order book. Both a 141-footer (40-meter) and a 164-footer (50-meter) are in build as well. These follow the recent delivery of Elsea, the first Fuoriserie, also measuring 164 feet.