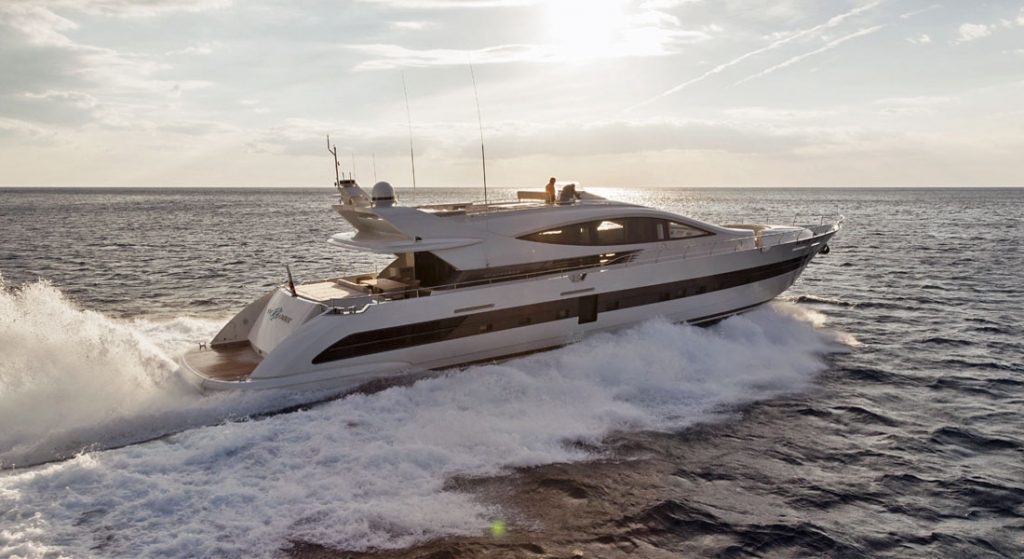 Sporty styling never goes out of fashion. Neither, it seems, does sporty speed in the superyacht sector. A couple from the United States is proving these to be true. They’ll be the newest 102 Flyingsport owners in the CCN fold come next summer.

The semi-custom 102 Flyingsport series premiered in 2011 and has seen several deliveries since. Interestingly, it was the flagship of Italy-based CCN until the fully custom, 164-foot Elsea splashed this year. However, since the series features fiberglass construction, and Elsea has an aluminum hull, it’s still arguably a flagship of sorts. (There’s a smaller Flyingsport model, for example, the 86.)

The owners are, as you would expect, tailoring the yacht to their tastes. It starts with a champagne-colored hull, highlighting the sleek lines. Inside, they’re working with a so-far-unnamed Italian designer. For now, CCN will only reveal that the main deck follows architectural trends of open-space layouts. This includes the galley.

For some perspective on what else these owners may do, consider how previous 102 FlyingSport customers have taken liberal advantage of customizing spaces. Some, for example, have opted for two VIP staterooms with the master below decks. Others cruise with more family and friends, and therefore requested three guest cabins. Still another owner wanted a spa with a Turkish bath below decks. A further interesting request: the captain’s cabin aft of the wheelhouse. Few, if any, yachts of this LOA (102 feet, or 31 meters) follow that route.

Something the American couple isn’t changing, though, is the 102 FlyingSport’s emphasis on swift performance. CCN says twin MTUs should allow the megayacht to hit a top speed of 40 knots. Though, the couple did make one important request when it comes to performance. In keeping with what many fellow Americans do, the owners plan shallow-water cruising. Therefore, draft will be an incredibly shallow 3’9” (1.2 meters).

In the meantime, for a look at what another 102 FlyingSport client chose, check out our gallery of Sealook.