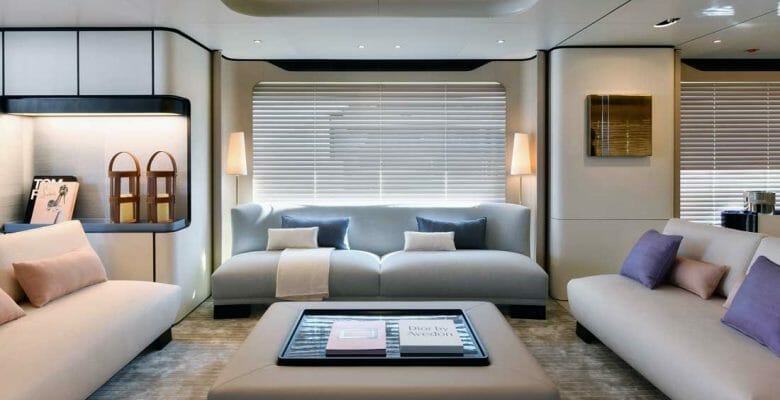 She sports the distinctive wave-piercing bow pioneered by her big sister, the Azimut Grande 35 Metri, in 2017. However, the new Azimut Grande 32 Metri, revealed at last September’s Cannes Yachting Festival, has a personality all her own.

A cutting-edge hull design by Pierluigi Ausonio combines a slippery and stable double-chine form with a wavepiercer. It lengthens the 105-footer’s waterline by nearly six feet. Azimut claims efficiency gains in the region of 30 percent, too. Meanwhile, the hull’s extra-fine forward sections reduce buoyancy in the bow and smooth the ride in head seas. A pair of 2,200-hp MTU 2000 Series engines powers her. The shipyard claims a top speed of 26½ knots, as well as a fast cruising speed of 21 knots. 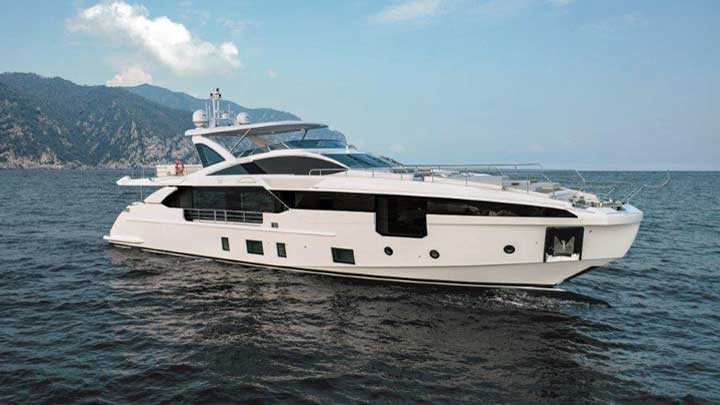 The raised-pilothouse Azimut Grande 32 Metri’s entire superstructure is carbon fiber. This enabled the designers to create huge spaces with no weight penalty. One glance at the vast 750-square-foot (70-square-meter) upper deck quickly confirms this. The impressive main-deck volume, from the airy saloon to the full-beam master, is appreciated thanks to full-height windows.

A curving flight of backlit onyx stairs leads down to the lower deck. Here the standard layout features a symmetrical arrangement of two double suites amidships and two twin-berth cabins forward. The owner of the model exhibited at Cannes opted to fit out the port twin cabin as a gym.

Like her bigger sister, the Azimut Grande 32 Metri has a space-saving lateral tender garage. In fact, she is the smallest motoryacht to have one, according to Azimut. It opens on the starboard side and can accommodate a 16-foot RIB plus a PWC. This arrangement clears the stern for a beach club, with its fold-out, teak-decked transom platform reached via steps down each side of the cockpit. Shaded by an optional awning stretched between four carbon poles, it becomes another outdoor relaxation area. 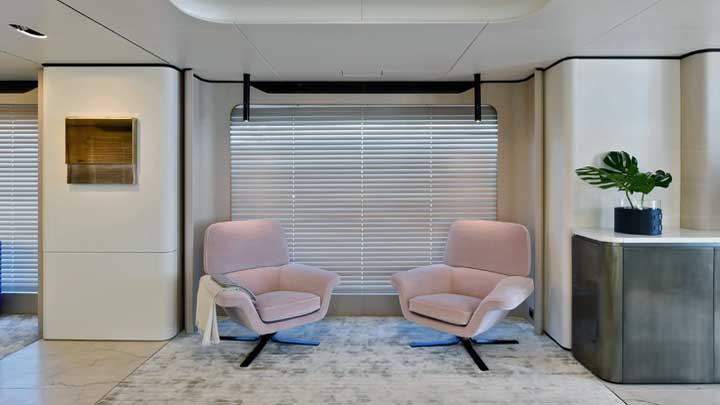 In pastel shades and muted tones, described by the shipyard as “butter and chalk,” together with understated, quality detailing, the Azimut Grande 32 Metri’s interior is by Achille Salvagni.  The studio was responsible not just for the styling and decor, but also all furniture design, with the honorable exception of the pink armchairs in the saloon.

“A yacht interior is like a big piece of furniture,” Salvagni tells us. “It’s made of wood—you can sculpt and shape it.” He originally trained as an architect and furniture designer, and his practice today includes furniture design, yacht interiors, and apartments. As to which is the most fun, he thinks for ooh, a millisecond and admits with a smile: “In terms of budgets, it’s yachts.”