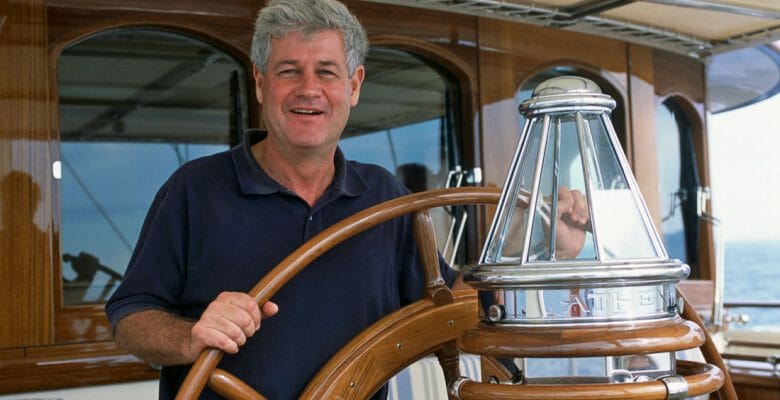 Michael Koppstein, a longtime captain and U.S. representative for European superyacht builders, most recently Lürssen, died over the weekend, of a heart attack. He was 65 years old.

Born in December 1953 in Australia, Koppstein grew up sailing, enjoying the pastime on weekends. While he pursued a higher-education degree in engineering design and construction, he didn’t forego his passion for the water. In fact, Koppstein became an avid offshore sailor, and mixed lessons learned from academia with ones learned at the helm. He continued to sail and earned his captain’s license, eventually working for owners of large yacht and sailing superyachts.

Noel Lister was one such owner. The late British business magnate earned renown for, among other things, establishing UKSA, a charity devoted to teaching children sailing and other maritime-training skills. Lister did so because he was an ardent sailor himself. He commissioned and sailed aboard a succession of yachts he christened Whirlwind. When he commissioned Whirlwind XII, a 103-footer (31.45-meter), he hired Koppstein as her captain.

Koppstein served aboard Whirlwind XII for six years, starting in 1986, putting thousands of nautical miles under her keel. Indeed, the yacht even undertook a circumnavigation with him. Between these voyages and others with further yachts, the Australian native logged about 200,000 nautical miles as a captain.

Perhaps not coincidentally, following Koppstein’s time aboard Whirwind XII, he received a job offer related to the yacht. Ron Holland of Ron Holland Design, who penned the yacht’s lines and additionally cruised on her with Lister, hired Koppstein. Though brief, it opened the door to yet another related job offer. The late Wolter Huisman, founder of Royal Huisman, which built Whirlwind XII, brought him onboard in 1992 as its American representative.

By this time, Koppstein had settled down in the United States, in Maine. He went on to spend the next 25 years with the Dutch builder. Lürssen tapped Koppstein as its American representative in 2017. He still worked for the shipyard at the time of his death. According to a statement from Lürssen, Koppstein was on a hunting trip in Romania when he had a heart attack.

When the German builder hired him, Koppstein stated, “For many years, I have served an industry that has rewarded me with a sense of pride and immense amount of satisfaction. I look forward to a fruitful relationship with a team that I have known and greatly respected for many years.” This morning, Lürssen released a statement, crediting him with working on its behalf “with vigor and enthusiasm.” It further states, “He shall be sorely missed by all those who worked with him.”

Koppstein is survived by his wife, Cathy, and his son, Justin.