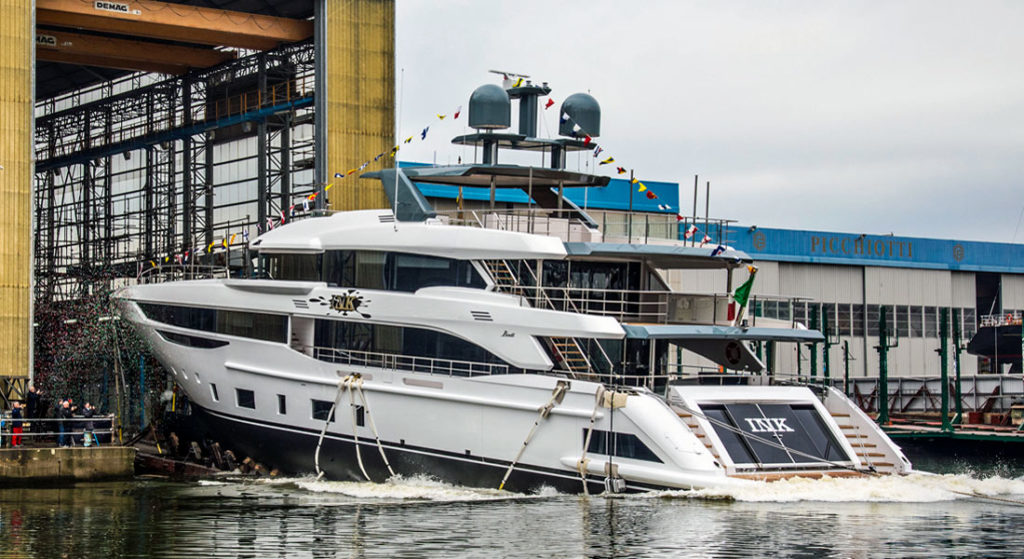 Hundreds of people, ranging from shipyard employees to local residents, turned out on January 25 to watch Ink, the first Benetti Diamond 145, make her way into the water.

The sparkling new semi-custom series is part of the Benetti Class category. Therefore, she emphasizes traditional cruising and employs all-fiberglass construction. This largest of the Class megayachts, the Diamond 145 features styling by Giorgio M. Cassetta, and has abundant glass on her upper deck. In fact, Benetti says 80 percent of that deck is glass.

The vistas that come from this amount of glass clearly benefit owners and guests. However, Cassetta had others in mind with the Diamond 145, too. “Diamond 145 springs from a project with a mission to improve life onboard not only for owners and guests, but for all the crew, too,” he explains. One example is the foredeck. While a large sunpad and relaxation area dominate this part of the deck, crew has unfettered space to handle fenders and other tasks as well.

The 145-foot (44-meter) megayacht will let them do that in a variety of locations around the world. Ink, as well as the rest of the series, should see a respectable range of 3,600 nautical miles with the twin MANs delivering an 11-knot cruising speed. Although no interior images are yet available, the owners chose a customary cabin arrangement. This puts four guest staterooms below decks. (On a side note, Benetti offers a fifth stateroom on the upper deck, for bigger cruising parties.) Ink additionally situates the master suite full beam on the main deck, as you might expect. The 456-ton megayacht also has a beach club, with sliding glass doors.

Considering yet another hull in the Diamond 145 series is in build for a customer, Benetti has high expectations for her appeal. Paolo Vitelli, the president of the Azimut-Benetti Group, credited Cassetta at the launch with giving the yacht “a soul… that integrates innovation and tradition.”