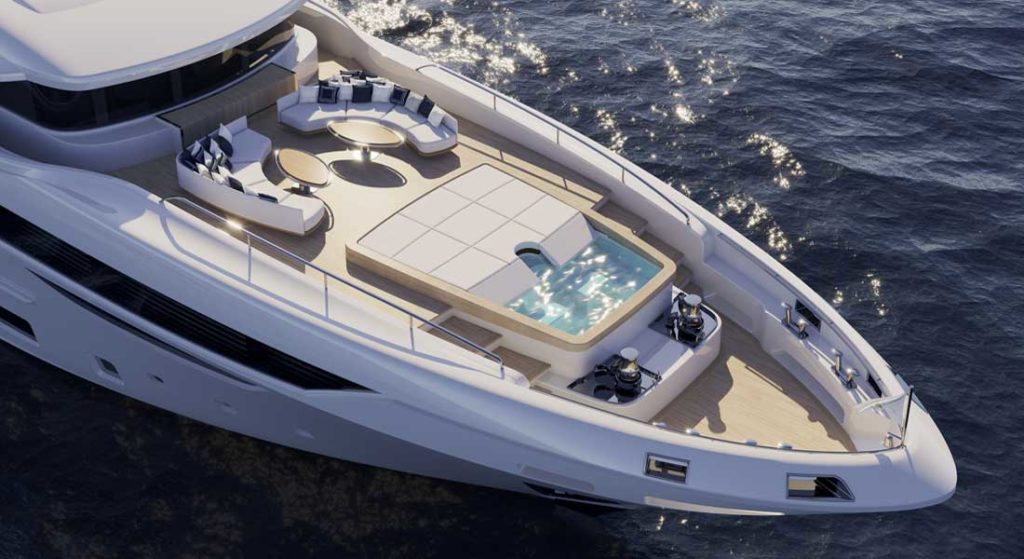 After nearly 20 deliveries in its Vision 145 series, Benetti has changed things up. It now has a slightly different megayacht model as part of its Class series, the Diamond 145. While you might assume everything from LOA to features is the same between the two yachts, there are actually notable differences.

The first, and most obvious, difference is the styling. The Benetti Diamond 145 bears styling by Giorgio M. Cassetta, vs. Stefano Righini. While still looking very much part of the Benetti family, the megayacht has the huge panes of glass spanning her sides that today’s buyers want. In fact, Benetti says 80 percent of the upper deck features glass. In addition, the superstructure proportions forward are different, allowing for a far larger leisure area at the bow. Cassetta says he and his fellow designers spent three years researching the best combination of practical and pretty details.

Also new: a beach club. When the Vision series started several years ago, transoms weren’t the relaxation spaces they are today. They’ve even undergone changes in recent years, too, which the Diamond 145 reflects. The yacht’s beach club is a usable area whether you’re at anchor or underway. And, of course, it’s yours to tailor as you wish, say with a bar, seating area, and/or spa. 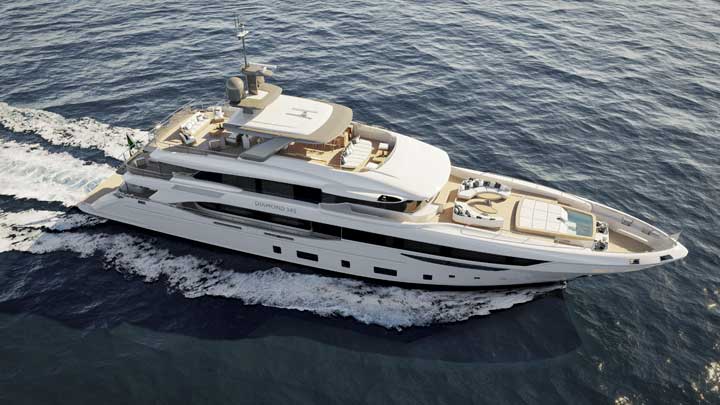 For the interior design, Benetti turned to Achille Salvagni Architetti. Achille Salvagni decided to “unite vintage concepts with contemporary ideas” for timeless appeal. This means you’ll find light tones to complement the sunlight streaming in, plus curves for a comfortable, welcoming ambiance. Interestingly, he also points out, “True refinement is cosmopolitan, telling stories and recollecting memories. The settings should therefore be interpreted as a story.” So, start thinking of the stories you and your family can create together if you cruise aboard.

You’ll have plenty of spaces to do so. The above-mentioned bow area aboard the Diamond 145 is nearly 754 square feet (70 square meters). Benetti says it’s the largest such, too. Up higher onboard, the Diamond 145 has even more alfresco areas. About 1,238 square feet (115 meters) awaits on the sundeck, entirely custom-arranged to your liking. Considering the beam is 29’7” (9.05 meters), your party of 10 can spread out. On a related side note, while offering four standard staterooms for guests below decks, the Benetti Diamond 145 can include an optional fifth cabin on the upper deck.

No matter how many people you cruise with, you can enjoy venturing afar. The shipyard anticipates a range of 3,800 nautical miles at 11 knots. The twin 1,400-hp MANs should permit a top speed of 15 knots.

In other yard news, hull number one in the Benetti BNow series has a buyer. Revealed last year, the series features design by RWD and consists of a few models, all with steel hulls. The buyer is a repeat customer, from the Middle East. Despite the LOA being 207 feet (63 meters), the volume is beneath 500 gross tons.