You are here: Home / Yachts / Motoryachts / Crescent 145 Hits the Water in Canada 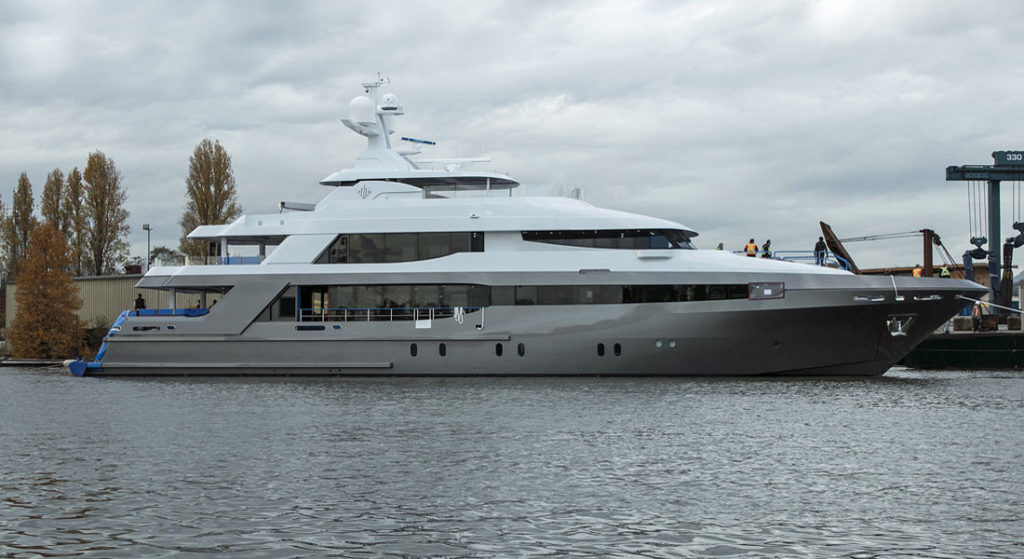 Currently undergoing sea trials, the Crescent 145 from Crescent Custom Yachts will soon be in her American owner’s hands. She is the Canadian boatbuilder’s biggest project to date.

The 145-foot (44.2-meter) megayacht is also the first launch since the shipyard reopened its doors. Still located in British Columbia, Crescent Custom Yachts restarted operations last year, after falling on hard times. Founded in 1988, the yard delivered custom composite yachts throughout the 1990s. Production stopped in 2004, partially due to the weakening U.S. dollar compared to the Canadian dollar. Investors purchased the name from Crescent Custom Yachts’ founder, Jack Charles, in 2005. They relocated construction elsewhere in British Columbia, and began building a trideck in the late 2000s. However, when the buyer reportedly defaulted on payments in 2011, work stopped. All production stopped the following year. Jack Charles’ grandson, Tim Charles, acquired the yard and re-established operations in 2015.

The Crescent 145 is the trideck that was partially completed. Acquired by a different owner, she has styling and interior design by Jonathan Quinn Barnett. With a beam of 28’6” (8.69 meters), she further has five staterooms for the owner’s party and accommodations for nine crew. As you would expect to see on a megayacht like this, the master stateroom is forward on the main deck. Thus far Crescent Custom Yachts isn’t releasing further details on the rest of the layout or decor. However, a number of custom touches are reportedly aboard. In addition, the draft of 6’9” (2.1 meters) means the Crescent 145 can reach a variety of shallow anchorages.

Crescent Custom Yachts has another megayacht under construction. She, too, is known only by her project name for now, the Crescent 110. Styling is by Luiz de Basto Designs, a first for the yard. A bigger first, though: She’s the first-ever metal Crescent. Construction is in aluminum.