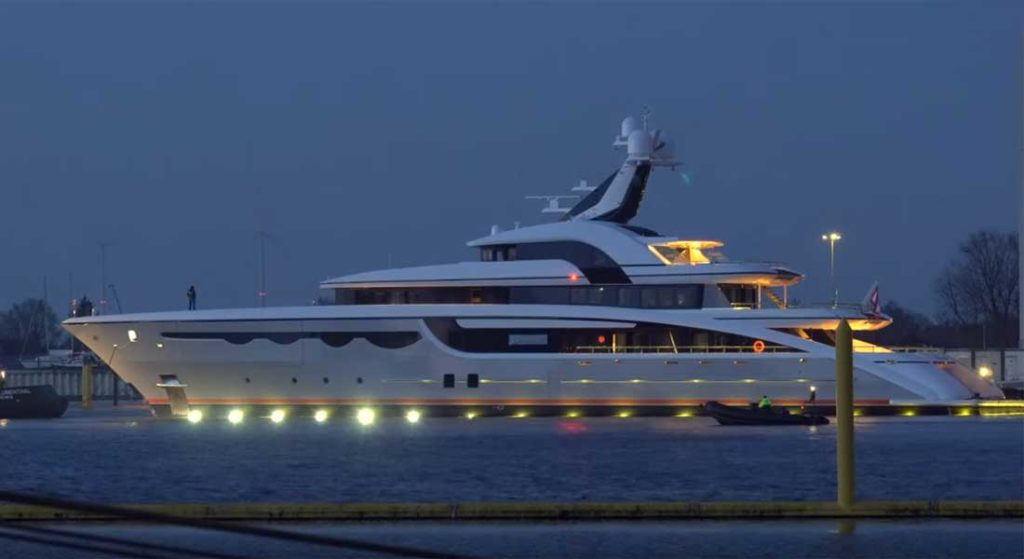 Captured just a few days ago, the 223-foot (68-meter) Soaring is putting her engines and other machinery through their paces in the waters of Germany. This is the second set of Soaring sea trials so far, ahead of her impending delivery from Abeking & Rasmussen.

While the project has been attracting interest among yacht watchers, she’s also highly anticipated by potential charter guests. The megayacht should begin entertaining select parties in the Mediterranean this summer, in addition to hosting private cruises.

During the recent Soaring sea trials, publicly available AIS data reveals she’s averaged nearly 13 knots at the top end. Fittingly, given her name, she has shown off striking curves, the most dramatic of which flow down to her transom. Curves also call attention to her uppermost enclosed deck. Black-painted surfaces combine with large swaths of tinted glass to further draw attention.

With a 38-foot (11.6-meter) beam, Soaring will eventually entertain a party of 12 aboard. Focus Yacht Design, another Germany-based firm, has been creating an atmosphere conducive to spending a lot of time enjoying one another’s company. On the sundeck, for instance, a bar and a hot tub will keep the mood light for friends and family. An added benefit is privacy, since it’s a cozy aerie. Started as hull number 6506, the yacht has rich tones and textures throughout her interior. Among those other interior areas are five guest suites, all on the main deck, and a dedicated owners’ area aft on the upper deck, including a library and alfresco area.

Soaring sea trials should conclude soon, allowing the owners to enjoy an inaugural cruise before summertime.