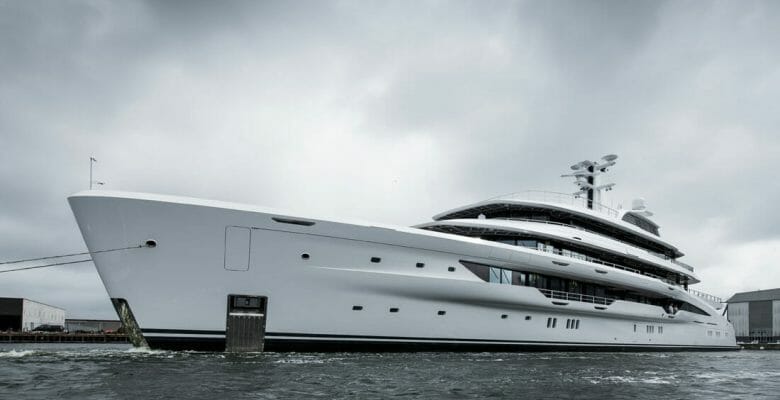 The largest Amels in terms of volume took on dramatic weather early in the morning of September 30. Grey skies and whitecaps greeted the Custom Amels 78 as she embarked on her first set of sea trials.

The yacht marks the yard’s first collaboration with Espen Øino and his studio, thanks to the specific request from the owner. In fact, the owner turned to the studio for both styling and the general arrangement. Notably, Øino says it’s been “an intense collaboration with Amels” as well as “an amazing journey so far since signing the contract in 2017.” Construction started on the yacht—with her name withheld due to a confidentiality agreement—two years later. Launch occurred a few weeks ago, too.

With an LOA of 255 feet (77.8 meters), the Custom Amels 78 has a significant volume of 2,885 gross tons. That makes for impressively airy spaces, for both crew and guest use. For instance, see if you can spy the side decks in some of the aerial footage. They are wider than typical for yachts of this size, and some of them serve as balconies for guest suites just inside. Additionally lending this comfortable feel, the yacht’s beam is 46 feet (14 meters).

Although few other facts are public, the megayacht accommodates 14 guests, including the owners. Twenty-six crewmembers will join the captain aboard, too. The owners have been working with Zuretti Interior Designers to ensure the saloons, staterooms, and other spaces all look and feel the way they want to live on the water.

The owners can certainly live aboard for weeks at a time to see cities they’ve long wanted to visit, if they so desire. Their Custom Amels 78 should achieve a range of 5,000 nautical miles while cruising at 13½ knots. Top speed, meanwhile, is 17 knots.

Even with sea trials occurring now, the megayacht is remaining at the shipyard for a few more months. Delivery takes place next year.