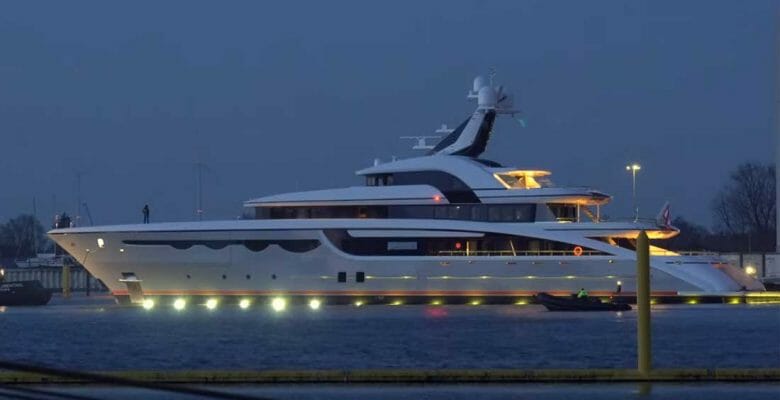 There’s nothing quite like a yacht launch to start the year off. In the early morning hours on January 18, Soaring slipped into the water and came into better view in Germany. While she’s remaining on site at Abeking & Rasmussen for a while longer for final finishing work, she already has charter guests looking forward to spending time onboard later this year.

Although interior photos are not available, Ocean Independence released a handful of illustrations in December. Germany-based Focus Yacht Design has been working with the owners to create an ambience in which a party of 12 can enjoy spending a lot of time together. In fact, the emphasis is on multiple mixing and mingling areas, particularly outside. For example, the sundeck of Soaring includes features a customary hot tub as well as a bar. Also in customary fashion, Soaring has a beach club. Complementing it, the megayacht situates a gym and steam room just forward.

Interestingly, all of the guest suites onboard sit on the main deck. There are five in total. The owners, meanwhile, have a private domain aft on the upper deck. They further have a private alfresco area fully aft, which they can access via sliding doors. As much as they plan to entertain their guests, though, they can enjoy solo time in their own library.

As mentioned, Ocean Independence released the interior renderings. It did so to additionally entice charter bookings. While Soaring should see delivery in the springtime, she’s taking select charters in the summer in Mediterranean waters.