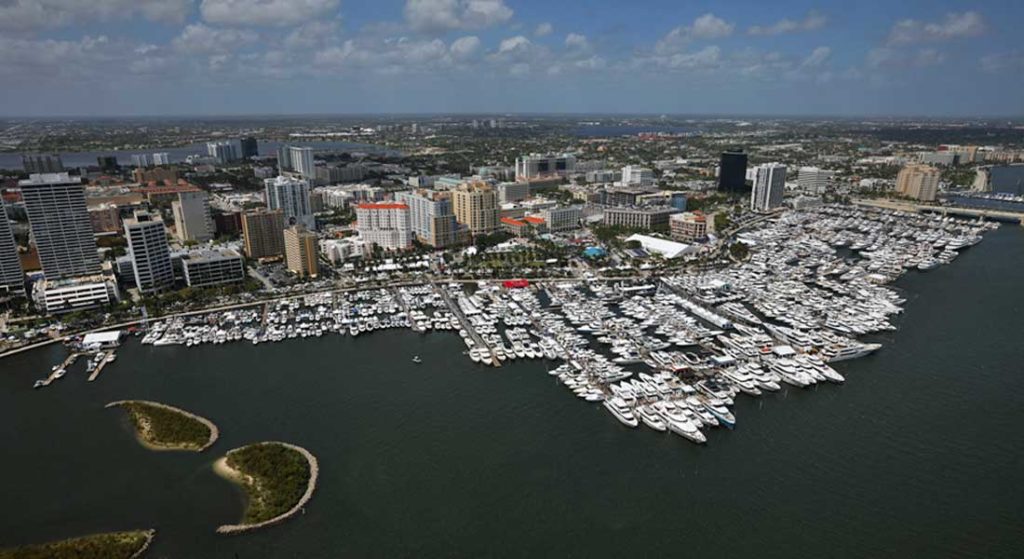 UPDATE, APRIL 27, 2020: The Palm Beach International Boat Show is going virtual with more than 430 exhibitors. You will be able to “shop” for items ranging from marine gear to megayachts, as well as tour hundreds of new and used boats while connecting directly with builders and brokers. To making navigating easier, a virtual shopping guide will list exhibitors by category (Center Consoles, for example). Furthermore, videos will include walk-throughs of yachts, product demos, fishing clinics, and more.

Uncertainty seems to be the only certainty currently when it comes to large public gatherings. With this in mind, the Palm Beach show is doing something it has never done in its 35-year history. In fact, it is doing something no other similar event has ever done. Rather than welcome visitors in person, the Palm Beach International Boat Show is going virtual. In other words, it’s switching to an entirely online format.

Details are still scarce. In fact, the show producers have only just announced the format change. They also thus far have only revealed that the online show will take place from May 14 to 17.

Those are the same dates that the event was set for following postponement from March. Initially, the show was set for March 26 to 29. On March 12, though, organizers cited state and local officials’ warnings to suspend mass gatherings due to the coronavirus. Complicating matters, the evening prior, President Donald Trump announced a suspension of air travel for foreign nationals from 26 European countries to the United States. Therefore, international exhibitors and visitors would not be able to attend.

Quickly—specifically, on March 17—organizers announced new dates, May 14 to 17. But, the show postponed a second time just two weeks ago.

Regarding why the Palm Beach International Boat Show is going virtual, organizers say it comes “following the latest restrictions and with considerable communication with our local and state officials.” In issuing an executive order in March, the governor of Florida strongly urged citizens to refrain from gatherings of 10 or more people. As part of that order, he urged limiting travel and personal interactions to providing essential services or conducting essential activities.

Organizers further say, “We are all eager to get back on board and help to continue contributing as a major statewide economic driver. While the show will no longer take place in its original form, we are looking forward to engaging our passionate audience of marine enthusiasts with the nearly 500 premier exhibitors via our virtual show.”

Organizers pledge to update the official boat-show website with details “in the coming weeks.” For now, the website reveals the virtual event, as well as an expected traditional event next year in March.