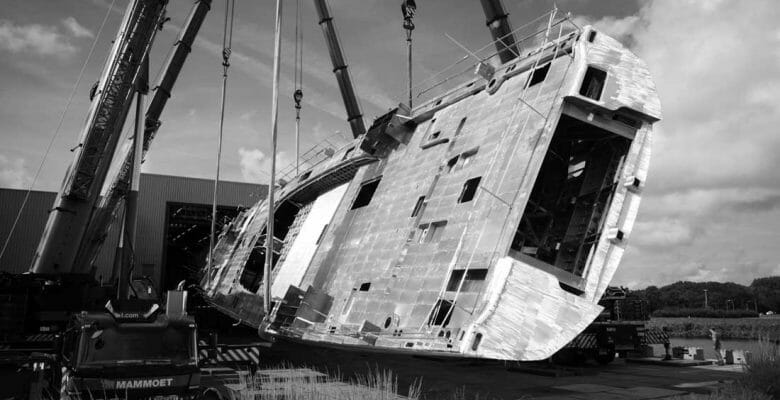 PHOTOS: Project 404 Owners (above) and Royal Huisman (below)

Project 404, a high-performance sloop still under much secrecy at Royal Huisman, celebrated a milestone today. With her owners looking on, the Project 404 hull slipped out of its build shed and turned right side up. The milestone not only keeps pace with delivery set for 2022, but also lends the first looks at some of the sailing superyacht’s special features.

Thanks to styling and naval architecture by Malcolm McKeon Yacht Design, the 196-foot (59.7-meter) yacht has a reverse bow. More notable, however, is the large transom opening. Because the owners requested secrecy to surround all detailed drawings, Royal Huisman released just a whisper of an illustration in announcing the yacht in early 2019. Therefore, this transom opening, for the beach club, is just now public. In combination with sizable ports to each side, the beach club (notably unusual on a sailing yacht) should be a welcoming area.

Speaking of welcoming, the Project 404 hull has boarding platforms to port and starboard amidships. Although Studio Liaigre’s design for the interior foyer remains confidential, this will be a primary entry and departure area for the owners’ party of 12 via tender. That tender, by the way, stows beneath a flush deck hatch—one of several such hatches for sail stowage, winches, and more, too. 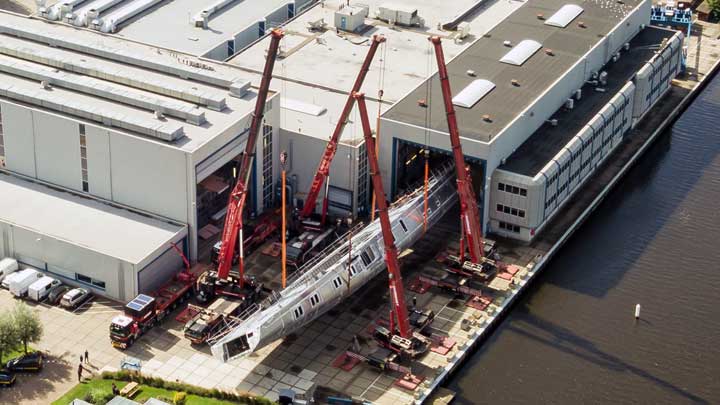 All of these complement aspects already public. For instance, the Project 404 hull will feature a retractable propulsion system. It will also have a lifting keel and twin carbon rudders. The owners plan to enter “this incredibly sleek and powerful yacht,” as Malcolm McKeon puts it, in regattas. The underwater arrangement further makes cruising some global destinations easier.

Even with the global pandemic continuing, construction has remained on schedule. “The past months were ‘different,’ but we managed to accommodate client involvement all the same,” comments Jan Timmerman, Royal Huisman’s CEO.

The next steps include joining the carbon composite deckhouse to the hull. Royal Huisman’s sister company, Rondal, has the deckhouse and additional components already underway. Better yet, Royal Huisman does intend to release more details as construction progresses and delivery approaches.