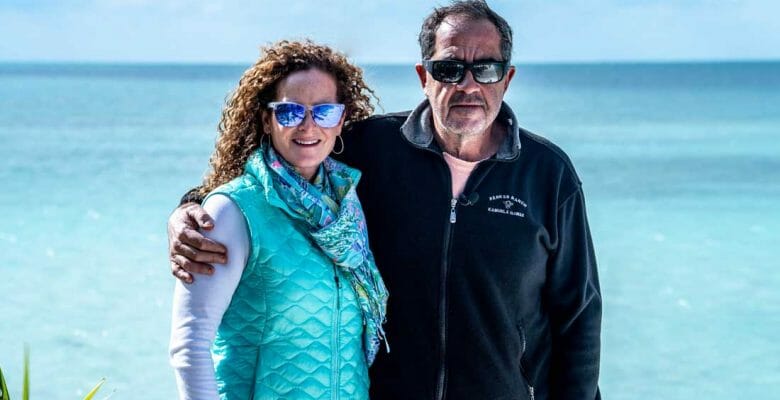 Texas-born owner Carl Allen knows how to squeeze every last drop out of his fleet. He is the proud owner of the Westport 164 Gigi (named after his wife, pictured with him) and the Damen support vessel Axis. The souped-up Axis carries a Triton 3300 submarine, a foldable-wing amphibious plane, two flats boats, a dive shop, a 39-foot tender, and much more. Allen pursues many of his passions through his fleet, including fishing, salvage diving, and exploring in one of the world’s most picture-perfect settings: The Bahamas.

Uniquely among owners, however, Allen has taken his deep love for this part of the world one step further. Currently, he is restoring the northernmost Bahamian island Walker’s Cay. It remains closed since 2005, following two consecutive devastating hurricanes. Here, Allen explains his plans for transforming Walker’s Cay into a superyacht hotspot and his aims for expanding his fleet.

MegayachtNews.com: How has life been for you and your fleet over the past year?

Carl Allen: It’s been a blessing in disguise. We were able to get my family to safety when things got really bad and focus on our work rebuilding the island. The problem in The Bahamas was not the pandemic itself, as the Prime Minister has done an incredible job at controlling the virus. But, it has absolutely chilled the economy here because 80 percent of the GNP is tourism, and that disappeared overnight,

Walker’s Cay will be important for the economy because I am going to need workers from all corners—from fishermen, to managers, to chefs and musicians. I anticipate six to seven businesses starting up. The gateway has been dormant for 20 years, and it’s reopening. I’ve been told by many people that it is the brightest spot in The Bahamas right now.

MegayachtNews.com: What is the timetable for reopening Walker’s Cay?

Carl Allen: Because of the devastation caused by Hurricane Dorian in 2019 and the pandemic, the works are about two years behind. Our first event will be a big marlin fishing tournament later this month on Memorial Day. We have over 200 boats on the waiting list! The good news is that the marina will be completed in about two weeks, and we will have about 90 slips. I will have space for about 50 center console boats, but we should also be able to accommodate up to eight superyachts as big as 200 feet. We are hoping to be able to open some guest rooms sometime next spring. We’ve got a master plan for 26 little villas, as well as a bigger lodge and lots more.

MegayachtNews.com: How important is it for you that Walker’s Cay is a sustainable project?

Carl Allen: My background is the trash business, so I know all about ‘reduce, reuse and recycle.’ We aim to have zero waste coming off the island and will be using liquefied natural gas instead of diesel, which reduces emissions by around 80 percent. A lot of thought has gone into our environmental impact, asking ourselves, ‘How do we rebuild this island that has been sitting here in its natural condition for 20 years?’ The reef around us is one of the most robust, healthy reefs, not only in The Bahamas, but in the world, and we intend to keep it that way.

MegayachtNews.com: Have you made any historically significant discoveries through your salvage diving?

Carl Allen: Over the years, we have found remains from ships dating between the 1500s and 1800s. We believe we may even have stumbled upon a slave ship, which is obviously very important historically to The Bahamas. We found a belt buckle with the name Constable Mauritius on it, which dates it to the mid-1800s as a British ship, and we found half of a shackle along with it.

MegayachtNews.com: What are your future plans for your fleet?

Carl Allen: Once we’ve got Walker’s Cay open, my wife and I have a dream of going around the world, but I’m going to need to redo my fleet first. I am very interested in the new Westport 172. I’d like to combine the qualities of Gigi and Axis into one of these new super boats: something that could reach both poles and circumnavigate the world as a true expedition yacht.