You are here: Home / Yachts / Motoryachts / ToyBox ShadowCat Can Launch in 18 Months 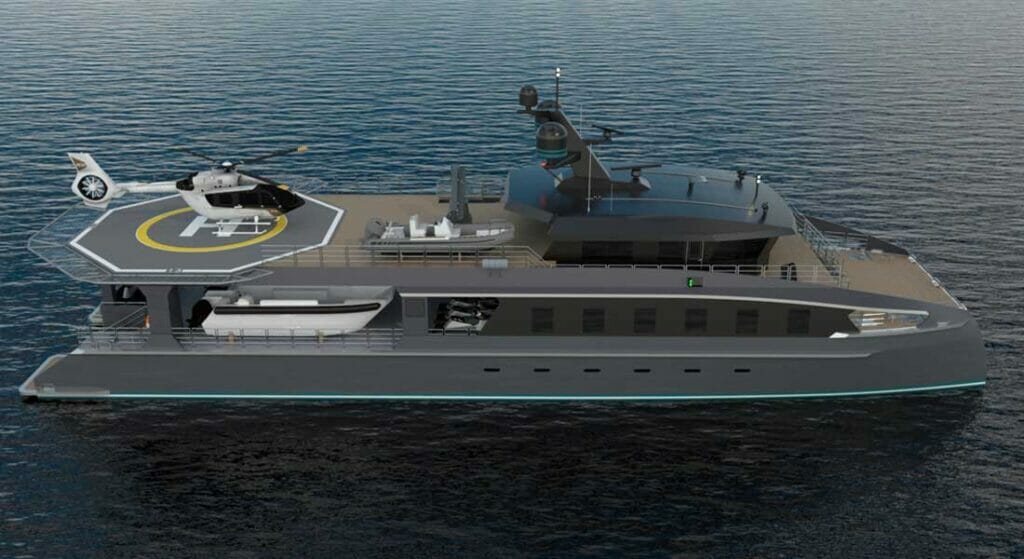 Due to the continued popularity of shadow vessels and particularly catamarans, ToyBox is the latest concept from the teams behind ShadowCat. Featuring a proven hull form and engineering package, the super cat can start construction and launch in 18 months.

Measuring 158 feet (48 meters) with a 39-foot (12-meter) beam, ToyBox builds upon two larger sister designs, namely Wayfinder and Hodor.  She does so while remaining beneath 500 gross tons in volume, yet without losing valuable space. She’s intended for owners who want “a moderately sized shadow yacht to support their existing superyachts,” explains Robert Smith, director of YCTS. YCTS is a project-management and consulting company. It joined forces with the design studio Incat Crowther to form ShadowCat. Dan Mace, Incat Crowther’s technical manager, adds that the lower volume makes her more cost efficient to construct, crew, and operate.

Capable of construction at Armon Shipyards in Spain, ToyBox offers a fully customizable layout. For starters, though, the ShadowCat team recommends a certified helipad. It’s suitable for the most popular craft owners choose, including ones from Airbus and Bell. The team additionally reserves the main aft deck for up to three tenders of 33 feet (10 meters) each. Overhead beam cranes take care of launching and retrieving them. Of course, even more toys can go onboard, such as submarines and PWCs.

Inside, meanwhile, you can include crew and/or guest cabins, along with a galley and even more stowage. The ShadowCat team says the catamaran design lets ToyBox offer 60 percent more deck space overall compared to monohulls of the same LOA.

One of the biggest benefits of ToyBox is her smallest: her draft, coming in at just seven feet (2.15 meters). This provides a good deal of flexibility in terms of reaching relatively shallow waters. In fact, it lets the mothership stay put at anchor farther off the coast. Plus, catamarans provide better stability during loading and offloading due to their twin hulls being in the water.