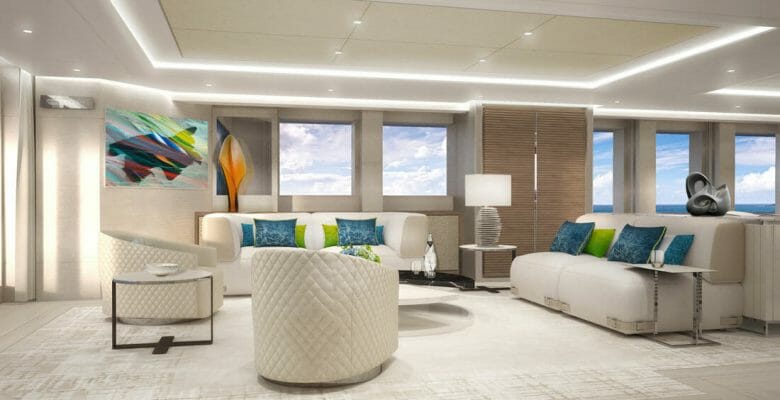 Heesen created Project Aura as the latest sub-500-gross-ton yacht in its 50 Meter Steel Displacement series. LOA is about 164 feet (50 meters), and the displacement hull promises a 3,800-nautical-mile range at 13 knots under MTU power.

The buyer is an American, the latest of several such clients for the Dutch builder. In fact, the shipyard just closed a deal with an American couple for another spec project within the past two weeks. That megayacht, Project Sapphire, now belongs to repeat Heesen clients Bob and Amy Book, who owned Book Ends. They plan to christen their new yacht with the same name, too.

As for the buyer behind Project Aura, we don’t yet know the name he’s chosen for her. Regardless, according to Heesen, he’s owned a few yachts over the years. Furthermore, he visited a few other megayachts from the builder with Thom Conboy of Heesen USA. Then, he visited the shipyard, and particularly liked Project Aura’s styling, from Clifford Denn.

Construction was already well underway, since the shipyard initially planned completion and delivery later this year. However, the owner plans some changes, naturally. Therefore, delivery will be next April.

Not changing, though, is the layout of five staterooms for 10 guests. Of course, this includes a main-deck master suite. The megayacht also has a dedicated beach club, with fold-down platforms, plus tenders stowing on the foredeck. Further not changing is the design studio for the interior. Reymond Langton Design came onboard at Heesen’s invitation at the onset. The design studio suggested an ambience with whites and taupes as the backdrop to striking accent colors like sea green and deep blue.