You are here: Home / Yachts / Motoryachts / Heesen’s Project Sapphire Shines Outside Her Shed 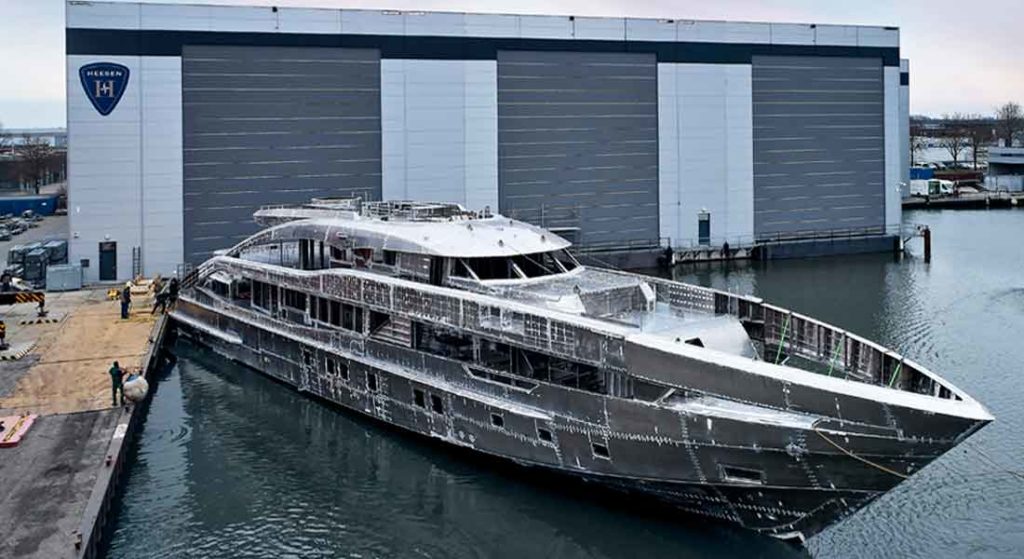 The second of Heesen’s redesigned 5000 Aluminum Class megayachts has marked a milestone. Project Sapphire is showing off her sleek styling, now that her hull and superstructure have joined together.

Reflecting seemingly carved, sharp lines, the yacht retains the family feel of multiple predecessors, although with a bit more modern flair. Similarly, she stays true to the tradition of emphasizing a good turn of speed, while remaining beneath the 500-gross-ton mark. In fact, Project Sapphire should have a maximum speed of 23 knots with twin MTU 16V 4000 series engines. For long-range journeys, the captain can throttle her back to 11 knots, which Heesen says should result in covering 3,100 nautical miles. Additionally, to comply with the IMO Tier III nitrous-oxide emissions regulations, Project Sapphire has a Selective Catalytic Reduction (SCR) system.

Further to her performance, the hull design incorporates some changes that the build and naval-architecture teams assert will make her 12 percent more efficient in her travels. Those travels can include deep and relatively shallow waters, too, since her draft is 7 feet (2.15 meters).

The hull and superstructure joining took place on January 16. Since Project Sapphire is under construction on spec, interested buyers can still step in to personalize the alfresco and interior areas. To start the design process, though, Heesen turned to Cristiano Gatto Design, to create areas for a party of 12. These include a main-deck master suite and four staterooms below decks for guests. They also include dining outside on the bridge deck as well as on the sundeck. The sundeck additionally has a hot tub and bar. Naturally, tenders stow in a dedicated garage, which transforms into the beach club when they’re in the water.

While Project Sapphire will be ready in June 2022, Heesen has a busy delivery season set for this year. Among the megayachts it will deliver are Project Sparta, its largest steel-hulled yacht, and Project Cosmos, a 262-footer (80-meter) capable of 30 knots.