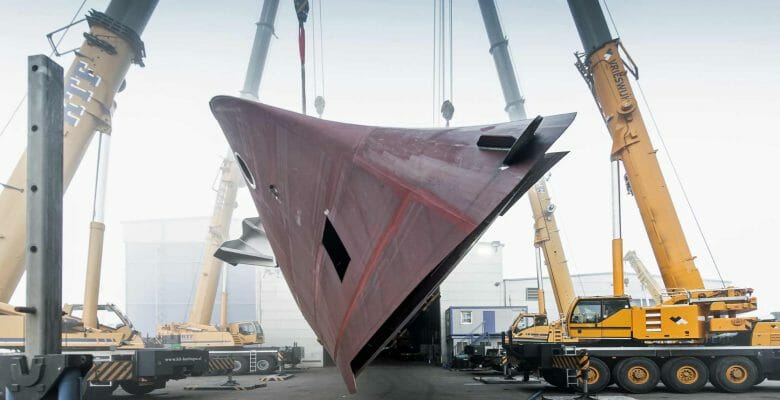 Nine months after Moonen Yachts announced she’d start on spec, the hull of Moonen YN202 completed a milestone. It took four hours, with slow and steady crane works, amid foggy conditions. Her steel hull flipped from being upside down for construction to right side up for outfitting and, ultimately, marrying with the superstructure.

The hull for the project, a.k.a. the Moonen 110, has been in build since the summer at Talsma Shipyards. The Dutch facility provides hull services for a few commercial and superyacht shipyards. It also performs yacht refits.

If you’re wondering why construction was upside down, Talsma Shipyards is actually not unlike other facilities. In fact, it issued a statement following the launch. The approach “makes building easier, since the building floor and deck are both flat, and it reduces the time spent working above the head.” Further interesting to note, Talsma says, “The building process is typically about 60 percent finished when the turning takes place.”

Moonen YN202 flipped in the presence of Moonen’s staff as well as representatives from Diana Yacht Design, her naval architect. The three-deck megayacht measures 111 feet (33.87 meters) with a beam of 24’6” (7.5 meters). Since the project is on spec, buyers can personalize the interior and exterior living areas as they see fit. For the time being, the shipyard recommends a five-stateroom layout, naturally including a main-deck master. Earlier, the shipyard suggested a four-stateroom design, with a full-beam VIP below decks. Either way, the 256-gross-ton megayacht also provides accommodations for a captain and crew total of five.

Set for delivery in March 2023, Moonen YN202 will meet Bureau Veritas classification rules. Expect a cruising speed of 10 knots and maximum speed of 13 knots with Caterpillar engines. Best range should be 3,300 nautical miles at 9 knots.