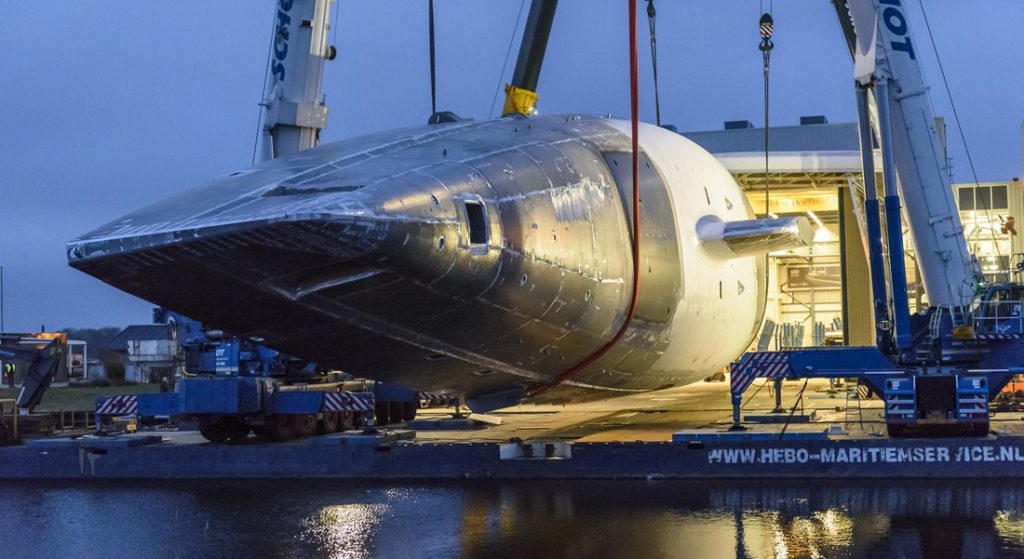 Since shipyards construct metal hulls upside down, they need to flip right side up when ready for machinery and superstructure installations. The trick is, flipping is an hours-long affair. The bigger the yacht, the longer it takes, too. So, you shouldn’t be too surprised in seeing daytime turn to night in the video below. It’s a two-minute, time-lapse look at Royal Huisman turning the hull of the 81-meter Project 400, a superyacht schooner that will break records.

Announced in September 2016, the 266-footer saw keel laying last June. She’s Royal Huisman’s biggest boat thus far. Come delivery in 2020, she should rank among the 10 largest sailing superyachts worldwide as well. Even more significant, she should be the world’s biggest all-aluminum sailing yacht.

A big project requires big lifting capabilities. Therefore, Royal Huisman enlisted four cranes to turn the 81-meter superyacht schooner hull. (Naval architecture, by the way, is by Dykstra Naval Architects. Styling comes from the studio in conjunction with Mark Whiteley Design.) Once the hull wheeled out of the shed, the cranes began the delicate operations. Note that at one point, the structure dangles (under control, of course) partially over the water outside the build shed. You really get a sense of the scale. While it’s well into the evening when the operations finish, you’ll then see Project 400 lower back down onto her cradle. She then wheels back under cover.

Project 400 will remain under that same cover for the next two years. Construction is already underway on the superstructure—and has been for some time. Royal Huisman is further already into the assembly of the interior furnishings, in its in-house joinery department. In addition, the builder’s sister company, Rondal, started on the Panamax-height masts.

Following launch, sea trials should confirm some impressive numbers. A performance yacht, Project 400 should achieve 20 knots. Strong seakeeping is a priority, too, given the owner’s plans for globetrotting. She’ll additionally have accommodations for 12.