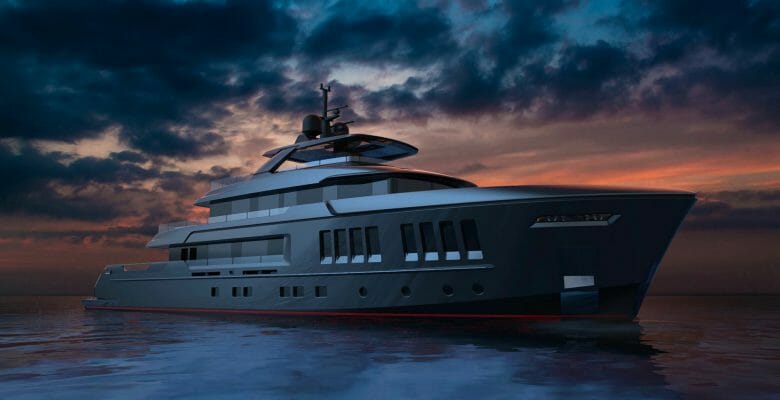 Hull number one of a semi-custom range from the leading explorer shipyard is under contract. The Cantiere delle Marche EXP 43 combines bold cruising ambitions with luxurious living, whether the owners pursue adventures in remote cold or warm climates. This megayacht is the latest contract from 2021, “the most memorable year since CdM started its activity in 2010,” according to co-founder and sales and marketing director Vasco Buonpensiere.

Part of the EXP series, which already includes the EXP 42, the 141-foot (43-meter) yacht features styling and interiors by Francesco Paszkowski Design. With a steel hull and aluminum superstructure, she should see a range exceeding 5,000 nautical miles at 10 knots. Her twin Caterpillar engines should additionally allow a top speed of 14 knots.

Although the shipyard is not releasing full details just yet, the Cantiere delle Marche EXP 43 has good volume, just below 499 gross tons. It comes amid a 28-foot (8.6-meter) beam and several notable creature comforts. For instance, abundant glass envelops the upper-deck lounge for brightness and better enjoyment of the cruising grounds, regardless of season. Similarly, the main deck has nearly full-height glass in the saloon. Interestingly, four guest staterooms sit forward on the main deck, making the most of the beam. Two further staterooms are below decks, each being twin cabins.

Given the main-deck suits, the Cantiere delle Marche EXP 43 puts the galley below decks. Even with that, the crew has a dedicated mess in proximity to their four cabins. The captain, of course, has his quarters just aft of the wheelhouse.

For when the owners and guests drop anchor for the day, the crew can offload tenders and toys from an upper-deck compartment forward.

As mentioned above, the project marks what Buonpensiere calls an extraordinary year for the shipyard. “In the last six months or so, we sold a remarkable number of explorer vessels,” he explains. Two Darwin 86 megayachts went under contract, for example, as did two Flexplorer 146s and five additional yachts. In fact, one is an entirely custom commission confidentially called Project T.

More details on some of those yachts, as well as the EXP 43, will come this year.