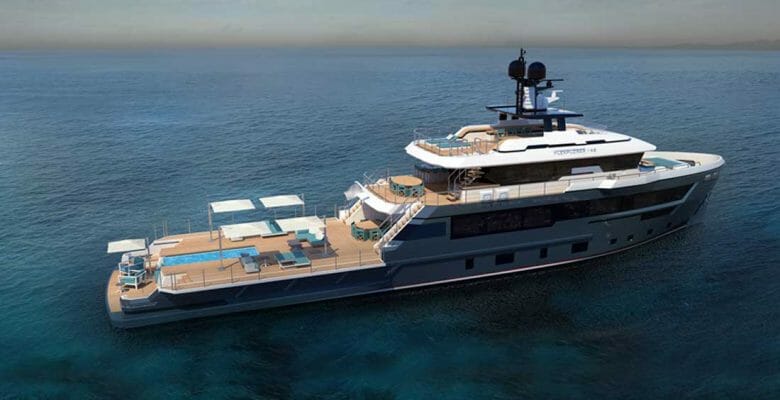 Mavericks never settle for doing the same thing everyone else does. That sounds like the same spirit as the German sailor who has commissioned Maverick from Cantiere delle Marche. The 142-footer (43.2-meter) will make her way through the Northwest Passage, among other areas.

Part of the shipyard’s Flexplorer series, the megayacht—a.k.a. Flexplorer 142—combines robust looks and engineering with yachting amenities. Because of the eventual plans to cross the Northwest Passage and therefore likely encounter ice, Maverick will have an ice belt. Cantiere delle Marche specifically is reinforcing her hull with 22-milimeter-thick steel plates both above and below the waterline.

Of course, the owner, who has had both sailing yachts and motoryachts over the years, plans other voyages, too. In fact, her first season will see Maverick treat her owner and his family to trips around the Med. Regardless of her ultimate destinations, she’ll enjoy a reported 5,000-nautical-mile range at 10 knots under MTU power. Top speed should be 14 knots, with naval architecture by Hydro Tec. 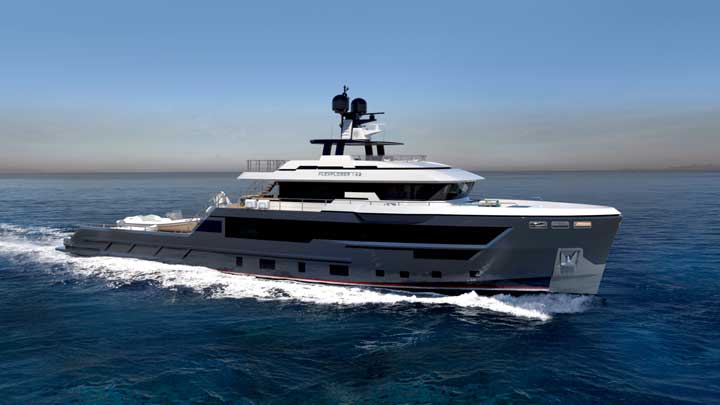 While not visible in the illustrations, Maverick additionally will have a large A-frame crane for tender handling. Specifically, the yacht will carry a Super Air Nautique G25, great for wakeboarding, and an A-Yachts A27 cruiser-racer sailboat. The crane stows flush with the deck when not in use. You may recall a similar setup aboard Aurelia, which is the first Flexplorer. When the toys are back onboard Maverick, they stow atop the pool, which will be covered. But, when they’re in the water, the pool becomes part of a significant beach-like area. In fact, the bulwarks to each side of it fold down to augment usable space, as shown. Total usable space: 1,453 square feet (135 square meters).

Inside, meanwhile, Francesco Paszkowski Design and Margherita Casprini are creating a family-focused ambience. The owner’s family will gather around a central island in the galley to enjoy breakfast or occasional meals, for instance. The galley is open to the saloon, too, to keep the mood low-key. As for the saloon, it’s full beam (28 feet/8.6 meters) to starboard, with a side deck opposite. This, too, is similar to Aurelia. Finally, Maverick will feature seven guest staterooms, including two master suites. One is forward on the main deck, while the second sits on the upper deck, with a single guest cabin next to it. The rest of the guests have below-decks accommodations.